Maharashtra were bowled out for a paltry 113 in their first innings.

After wrapping up Maharashtra for a paltry 113, Karnataka managed to scrap their way to a first-innings lead to end up back in the hut for 186 on day two of their Ranji Trophy 2018-19 match on Thursday.

Resuming their overnight score at 70/3 at the SDNRW Ground in Mysore, Karnataka lost Dega Nischal for 39 after he edged it behind to wicketkeeper Rohit Motwani off Anupam Sanklecha. Left-arm pacer Samad Fallah got into the act to snap two quick wickets Pavan Deshpande (9) and Jagadeesha Suchith (9) to leave Karnataka reeling at 94/6.

Left-arm spinner Satyajeet Bachhav, who claimed five wickets in the previous match against Baroda, spun a web around the Karnataka. He first had B Sharath trapped leg before for 14 and in an identical dismissal, sent skipper Vinay Kumar lbw for 26.

Shreyas Gopal s 40 off 100, highest score for Karnataka, ensured the first-innings lead, before the home side were skittled out for 186. Gopla was dismissed by Chirag Khurana, while Bachhav claimed his third wicket in Abhimanyu Mithun to wrap up the innings.

Maharashtra were at a lowly 48/3 in their second dig with Ruturaj Gaikwad and Bachhav batting on 9 and 4 respectively. For Karnataka, Gopal picked two wickets Khurana and the debutant Jay Pandey (15) while Mithun claimed the wicket of opener Swapnil Gugale, who departed after a 11-ball duck. 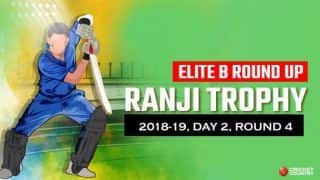