Ranji Trophy 2018-19, Elite A, Round Three, Day 4: Aditya Waghmode’s twin centuries in vain as Vidarbha run away with three points

Waghmode and his captain Kedar Devdhar conjured a massive 216 runs for the opening wicket in Baroda's second innings.

Aditya Waghmode, who scored 102, a reargued effort in Baroda’s first innings, added another, his ninth first-class century, but it was a case of too little, too late, as Vidarbha scampered away with three points in their Ranji Trophy 2018-19 Elite A Round Three match at the VCA Stadium in Nagpur on Friday.

Resuming their first innings on the final day at 288/7, Baroda added another 49 runs to reach 337, still trailing Vidarbha by 192 and had to follow-on. Wicketkeeper-batsman Pinal Shah, overnight on 14, was trapped lbw by Aditya Sarwate for 19. Soaeb Tai was caught by Akshay Wadkar off Ravi Jangid for 22, while Lalit Yadav wrapped up the innings to claim his third wicket in Lukman Meriwala (14).

In reply, Waghmode and his captain Kedar Devdhar conjured a massive 216 runs for the opening wicket with Baroda racing away to a lead of 24 at stumps. Waghmode’s unbeaten 180-ball knock was laced with nine boundaries and three sixes, while Devdhar, who registered his eighth first-class ton, smashed10 boundaries and one six in his 179-ball innings.

The three points put Vidarbha in third place with five points in three matches, while Baroda are a rung below with four points. 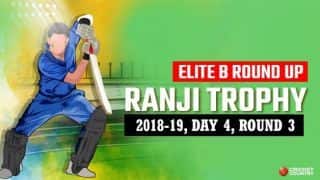 Have learnt professionalism, maturity and responsibility from the senior bowlers: Khaleel Ahmed