For Delhi, Khejroliya and Kumar returned with three wickets each.

Riding on T Ravi Teja’s maiden first-class century, Hyderabad were able to post a massive 460 in their first innings on day two of their Ranji Trophy 2018-19 Elite B Round 3 match against Delhi at the Rajiv Gandhi International Stadium on Wednesday. In reply, Delhi were 21 for no loss.

Earlier in the day, resuming from their overnight score at 234/3, Tanmay Agarwal, who smashed his seventh first-class century, was the first to depart after he was cleaned up by left-arm pacer Kulwant Khejroliya for 120.

Tanay Thyagarajan added just one after he fell to Simarjeet Singh as Hyderabad found themselves in a spot of bother at 265/7 in the 107th over.

Teja and Chama Milind then combined to accumulate 133 runs for the eighth-wicket partnership.Milind brought up his third first-class half century and departed for 58 when he was involved in a suicidal run out, courtesy a perfect throw from the deep by Khejroliya.

Gourav Kumar then wrapped the tail with the wickets of Mehdi Hasan (14) and Ravi Kiran (0) to leave Teja not out for 115 off 206, his innings laced with nine boundaries and one six.

For Delhi, Khejroliya and Kumar returned with three wickets each. 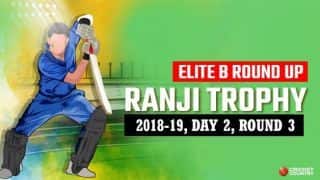 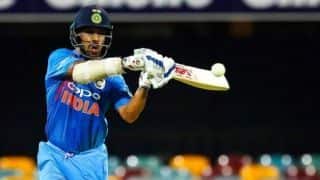