Faced with a massive deficit of 264 runs, Abhinav Mukund was dismissed by Sandeep Sharma for 74 (141 balls, 9 fours) towards close of play to leave Tamil Nadu at 166 for 3.

Mohali: A late strike by Sandeep Sharma gave Punjab the advantage on Sunday against Tamil Nadu at the end of day three of their Ranji Trophy 2018-19 Elite Group ‘B’ match.

Faced with a massive deficit of 264 runs, Abhinav Mukund was dismissed by Sharma for 74 (141 balls, 9 fours) towards close of play to leave Tamil Nadu at 166 for 3.

The home side appeared on track for a huge total as Gill, resuming on his overnight score of 199, continued to bat with ease. Though he lost skipper Mandeep Singh (50) early in the day, he found an able ally in the experienced Yuvraj Singh (41, 34 balls, 8X4) and added 61 runs at a fast clip.

Yuvraj, however, was unlucky as he was run out backing up too far when Gill’s straight drive was deflected off K Vignesh’s hand on to the stumps to leave him stranded.

ALSO READ: Nagaland fighting to salvage a draw against Uttarkhand

Later, Gill was involved in another useful partnership of 83 runs with Gurkeerat Mann (48). Lanky left-arm spinner R Sai Kishore’s six-wicket haul was largely responsible in restricting Punjab as he triggered a collapse after lunch.

From 462 for 5, the home team slid to 479 all out in 118.5 overs with Kishore taking the wickets of Mann and Gill, stumped by Dinesh Karthik when he stepped out for a big shot.

Tamil Nadu began the second innings in a solid manner with Mukund and N Jagadeesan batting positively, especially the latter looking for runs. Jagadeesan hit six fours and a six before Yuvraj had him caught by wicketkeeper Abhishek Gupta for 50.

Yuvraj struck again with his slow left-arm spin as he had Baba Aparajith leg-before wicket off the very next ball. TN captain Baba Indrajith, however, kept out the hat-trick ball. He and Mukund played in an assured manner and also scored whenever presented with an opportunity.

With the pacemen unable to get help like the way they did on the first day, Punjab skipper Mandeep was forced to rely on the spinners (part timers Yuvraj, Gurkeerat and Abhishek Sharma), who could not make much of an impact.

Mukund brought his fifty with a shot off Abhishek Sharma and continued to push on. He was dismissed against the run of play, caught by Jiwanjot Singh off Sandeep Sharma. 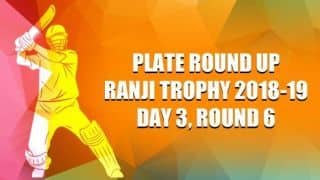 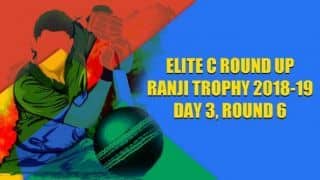