Aniket Choudhary and Tanveer-ul-Haq shared all seven wickets to fall as Uttar Pradesh limped to 146/7.

Group C leaders Rajasthan s hopes of making it four wins in a row in the 2018-19 Ranji Trophy took shape on day two of their round four match at Kanpur s Green Park Stadium, where by stumps they owned a lead of 165 over hosts Uttar Pradesh.

Senior batsman Robin Bist missed a century by four runs on the second morning, but his battling innings helped the visitors get to 311 on a bowler-friendly surface. Losing four quick wickets to Aniket Choudhary set back Uttar Pradesh, and the massive scalp of Suresh Raina in a three-wicket spell from Tanveer-ul-Haq left them with half the side down inside 26 overs. At stumps, UP had limped to 146/7.

From an overnight 221/5, Rajasthan added 90 runs on day two after losing three wickets before stumps on Wednesday. They lost Rajesh Bishnoi for the addition of one run and then Tanveer-ul-Haq for 0 to slip to 222/7 but Bist and Rahul Chahar added vital runs.

Having retired hurt on 68 yesterday, Bist returned to bat and played a steadying role before he was dismissed for the sixth time in the nineties when he was bowled on 96 by Shivam Chaudhary, the ninth wicket to fall. Chahar s unbeaten 32 was also a handy innings. For UP, pace bowler Ankit Rajpoot added two wickets to claim 5/61.

Choudhary delivered four wickets when he won an lbw shout against Chaudhary (2) and then added Mohammad Saif (0), UP captain Akshdeep Nath (1) and Priyam Garg (29) in a new-ball burst of 8-1-28-4. Raina threatened to summon his reservoir of experience in getting to 33 but Tanveer-ul-Haq bowled him in the 26th over and then got Rinku Singh (34) and Saurabh Kumar (11) to have UP at 117/7. 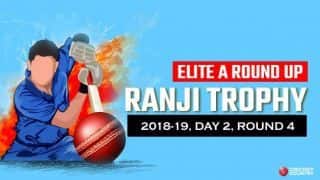