The Assam seam bowler Arup Das ransacked the Haryana batting order to the tune of nine wickets on day two as the visiting team was bowed out for 97 in 27.2 overs and ended on 78/7 after following-on at Guwahati in their 2018-19 Ranji Trophy Elite Group C round four match.

Batting a second time, Haryana slumped to 9/3 as Ranjeet Mali struck early before Das claimed 4/23 in a crippling nine-over spell. They trail by 135 runs.

Earlier, in a straight spell of 12-1-52-5 with the new ball, Das led Assam s dominance, backed by three wickets to Mali and two from Mukhtar Hussain, who earlier in the day proved a thorn in Haryana s side by scoring a vital 33 to get the total to 310.

From an overnight 215/6, Assam crossed 300 with Gokul Sharma adding 46 runs to his total before he was ninth out for 96. With Hussain (33) he put on 36 and then the last wicket added 17. Haryana would have been frustrated at allowing the last two wickets to inject 83 vital runs to Assam s total, but what really hurt them was losing half their side in 8.5 overs.

Das claimed the first two wickets by bowling Shubham Rohilla and Chaitanya Bishnoi for single-digit scores, but it was Mali s removal of Nitin Saini and Prashant Vashist in successive deliveries during the eighth over that really snapped the spine of the batting. Das bowled a third batsman, Pramod Chandilla for 0, to leave Haryana heaving at 22/5.

Wickets four and five came Das way as one-time India Test allrounder Jayant Yadav (30 off 25 balls) and PB Mehta were added in quick time to leave Haryana eight down with 72 runs on the board. Haryana captain Harshal Patel cracked two sixes in his 25, the second-highest contribution to the total.

Patel promoted himself to open in the second innings and was out to Mali for zero, the first of two wickets to fall in the second over as Haryana fell to 9/3. Das came on as second change and wasted no time in making it 26/4 with the wicket of Rohilla (8) for the second time in the day and then getting Vashist first ball, before he bowled Chandilla for 2 and got Yadav for a duck. 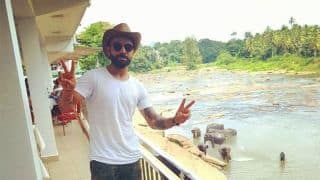 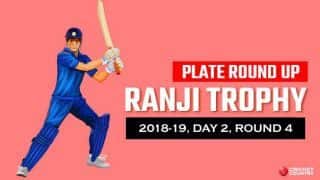