The hosts have taken a lead of 76 runs with a day s play and three wickets remaining.

Jammu and Kashmir captain Parvez Rasool scored an unbeaten century to drive his side to 272/7 at the close of play on Day 3 of their Ranji Trophy 2018-19, Elite C, round 7 clash against Odisha.

The hosts have taken a lead of 76 runs with a day s play and three wickets remaining.

On resumption of play on Day 3, J&K continued a good start before losing their first wicket in Shubham Khajuria for 60. Ian Dev Singh lasted 17 deliveries before being pinned in front for four by Basant Mohanty. Opener Qamran Iqbal went on to complete his half-century to take the score past the 100-run mark and became Mohanty s second victim, falling on 67.

Another quick strike brought together the experienced Irfan Pathan and Rasool together and the duo built a 69-run partnership, putting J&K in the lead.

They were separated when Pathan holed out on 15. Rasool completed his 11th first-class century even as wickets kept falling at the other end.

He has so far struck 16 fours and a six in his unbeaten 125 off 166 deliveries and had Aamir Sofi (7*) for company when the day s play ended. 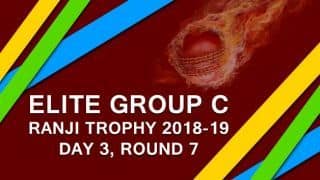