Overs 90: Bails drawn. Vidarbha finish Day 1 at 200/7 after opting to bat against Saurashtra in Nagpur. It’s been a day dominated by the Saurashtra bowlers who have kept their opponents on the back foot by making regular strikes. On the other hand, the defending champions have been unable to extend several promising stands. Akshay Wadkar and Akshay Karnewar did manage to build a 57-run partnership but it was broken late in the day by Chetan Sakariya. Wadkar departed after 45 off 115 with five fours which also was the highest for the day. For Saurashtra, Jaydev Unadkat was the pick of the bowlers, taking 2/26.

Overs 87.1: OUT! And the partnership has been broken. Saurashtra continue to find ways to break through. This time, Chetan Sakariya has Akshay Wadkar caught at cover point for 45 off 115. SCORE 196/7

Overs 85: With a four, Karnewar brings up the first fifty-run stand of the innings for Vidarbha today. SCORE 190/6

Overs 84: The partnership between the two Akshays is steadily growing and is now worth 45 runs. There have been a couple of occasions today when Vidarbha have managed to build decent partnerships but Saurashtra bowlers have managed to pull things back by striking regularly. SCORE 184/6

Overs 78: Akshay Wadkar and Akshay Karnewar have added 33 runs for the seventh wicket so far. Wadkar has struck three fours so far in his 89-ball 33 while Karnewar is batting on 19 off 36. SCORE 172/6

Overs 69: Akshay Karnewar brings up the 150 for Vidarbha with his first four of the innings. SCORE 150/6

Overs 65.6: OUT! Dharmendrasinh Jadeja gets his first wicket of the innings and it’s come in the form of Aditya Sarwate. Done in by the bounce as Sarwate goes for a pre-determined sweep with the ball kissing his glove before ballooning high in the air and Harvik Desai accepts an easy catch. He goes for an 11-ball duck. SCORE 139/6

Overs 62.5: OUT! Saurashtra strike right after the tea-break as Ganesh Satish edges one to be out caught behind. Prerak Mankad gets wicket in his first over. He scored 32 off 86. SCORE 134/5

Overs 61: TEA! So, Vidarbha lost on more wicket in the session with well-set Kale edging one to the slip fielder. SCORE 130/4

Overs 55: Spin in Makvana continues as Unadkat replaces himself with Chetan Sakariya. Akshay Wadkar manages to pinch a four off Makvana in the 54th over. He’s batting on 8 while Satish is on 21 off 61. SCORE 119/4

Overs 50: So Saurashtra have struck again to break what was turning out to be a promising stand. Akshay Wadkar is the new batsman in. Pace in one end in the form of Jaydev Unadkat and spin in Kamlesh Makvana currently in operation. SCORE 107/4

Overs 49.1: OUT! Kamlesh Makvana has broken the 46-run stand between Mohit Kale and Ganesh Satish. He has Kale steer one straight into the hands of slip fielder Harvik Desai. Kale scored 35 off 126. SCORE 106/4

Overs 45: Vidarbha batsmen are now opening up. Ganesh Satish smacks the second six of the innings, off Dharmendrasinh Jadeja and then Mohit Kale follows him with a four off the penultimate delivery in the 44th over. Jadeja then drops the final delivery towards leg and the ball evades everyone to roll away from four byes. 15 runs from the over. Jaydev Unadkat brings himself back next and bowls a maiden. SCORE 100/3

Overs 40: There was a chance for Suarashtra to take another wicket but the chance went a begging. Dharmendrasinh Jadeja induced an edge from Mohit Kale who went for a cut but got an edge that went to the left of slip fielder Desai. He went to his right and before he could adjust, the ball flew past him for a boundary. Kale was batting on 18 then. SCORE 79/3

Overs 35: The play has recommenced after the lunch break. This is going to be a crucial session for both the teams. For Saurashtra, it will be about continuing the pressure while Vidarbha will aim to not lose more wickets. SCORE 70/3

Overs 33: That will be lunch on Day 1. Vidarbha are in some trouble having lost two of their most dependable batsmen in Wasim Jaffer and Faiz Fazal in the morning session. Saurashtra bowlers, led by captain Jaydev Unadkat (2/16), have maintained a tight leash on their opponents by not allowing easy runs. Mohit Kale (17*) and Ganesh Satish (1*) are the two unbeaten batsmen. SCORE 67/3

Overs 30.2: OUT! That’s a big blow to Vidarbha. Jaydev Unadkat is pumped up and should be – he has gotten rid of Wasim Jaffer. Outside off and Jaffer prods at it and ends up getting an edge that is gobbled by the wicketkeeper. End of 31-run stand for the third wicket. He scored 23. SCORE 60/3

Overs 25: Three straight maiden overs from the Saurashtra bowlers. They aren’t letting easy runs and maintaining the pressure. You know what that leads to – wickets. But they are against one of India’s domestic behemoth – Wasim Jaffer who is known for playing marathon innings. This is going to be an interesting battle. SCORE 52/2

Overs 20: Wasim Jaffer has just hit the innings first six, off Dharmendrasinh Jadeja, dancing down the track over long-off. He’s batting on 18 off 36 alongside Mohit Kale who has made 5 off 31. SCORE 49/2

Overs 10.1: OUT! Vidarbha have lost their openers cheaply. Poor from Faiz Fazal as he has been run-out for 16. After getting an inside edge, Fazal sprinted for a single and then casually returned for a second. The throw from the deep was sharp and Fazal, due to his callousness, ended up being short of the crease. The wicketkeeper wasted no time in dislodging the bails. SCORE 29/2

Overs 6.3: OUT! Captain Jaydev Unadkat lands the first blow! Sanjay Ramaswamy edges one to first slip where Aarpit Vasavada takes a low catch. But the umpires are going upstairs for confirmation. The soft signal is out though. And replays confirm it was a clean catch. Ramawswamy walks back after scoring just 2. SCORE 21/1

Overs 5: It’s been a nervy start from the Vidarbha openers. There have been edges which have fallen safely, couple of loud appeals for lbw that have been turned down. Unadkat and Chetan Sakariya are getting the ball to swing. Fazal got a streaky boundary in the very first over off Unadkat when he attempted to drive the sixth delivery but got an outside edge that went past a diving second slip fielder. SCORE 11/0

9:31 am: Jaydev Unadkat with the new ball. Faiz Fazal and Sanjay Ramaswamy are the two Vidarbha openers.

9:15 am: Vidarbha captain Faiz Fazal wins the coin toss and opts to bat

8:30 am: Hello and welcome to our live coverage of the Ranji Trophy 2018-19 final to be played between Vidarbha and Saurashtra in Nagpur. The battle between India stars Cheteshwar Pujara and Umesh Yadav will make for an intriguing sub-plot when Saurashtra make one more attempt to win their elusive Ranji Trophy title against the defending champions Vidarbha in the final starting Sunday. Click here to read more

TOSS coming up in few moments 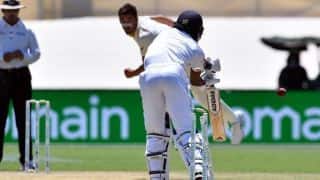 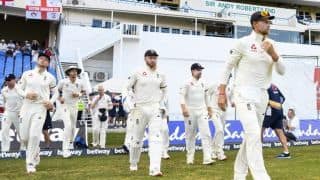