Dhapola returned with exceptional figures of five for in his 16.4 overs going for a meagre 2.94 per over.

Fast bowler Deepak Dhapola has created quite a wave in the Ranji Trophy 2018-19 season. In just four first-class matches this year, Dhapola has a whopping 37 wickets to his name and added five more on Friday to put table-toppers Uttarakhand in command against Nagaland on the opening day of their Plate group Round 6 match at Dehradun.

Opting to field, Nagaland, placed seventh in the nine-team group, slipped to 30/3 in the first 10 overs with Dhapola picking two of the top order batsman. Wicketkeeper-batsman KB Pawan and captain Rongsen Jonathan then steadied the innings with a 93-run partnership for the third wicket.

But just as the Nagaland innings was taking shape, Dhapola returned to send Pawan four runs short of what would be his 18th first-class half-century. Abrar Kazi, who has been in phenomenal form this season, scoring an unbeaten double century in the opener, fell for just 13, courtesy Dhapola, who cleaned up the in-form batsman.

Fast bowler Sunny Rana claimed three wickets as an middle-order collapse ensued with Jonathan emerging the top run-getting scoring 69 off 80. Nagaland were wrapped up for 207 after Dhapola sealed his five-wicket haul trapping Pawan Suyal for a duck.

Dhapola returned with exceptional figures of five for in his 16.4 overs going for a meagre 2.94 per over, while Rana had three wickets to his name in the 11 overs he bowled at 3.91.

In reply, Uttarakhand lost Karanveer Kaushal, who had scored the first double century of the Vijay Hazare Trophy this year, for 48 after he edged it behind to Pawan off Suyal, who cleaned up Rana for a duck. At stumps, Vineet Saxena was on 20, while Vaibhav Bhatt was yet to open his account with Uttarakhand still trailing by 134 runs. 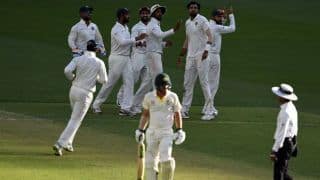