Spinners Krishnappa Gowtham and Shreyas Gopal shared seven wickets between them as Karnataka bundled out Rajasthan for 222 to set themselves a 184-run target for a place in the Ranji Trophy semi-finals in Bengaluru on Thursday. (ALSO READ: Uttar Pradesh extend lead to 349 against Saurashtra)

The visitors resumed at 11 for no loss with openers Amit Kumar Gautam (24) and Chetan Bist (33) spending considerable time at the crease before Abhimnayu Mithun broke the partnership by dismissing the former. (ALSO READ: Jaffer s double-ton pushes Vidarbha s lead to 204)

The following batsmen got starts with skipper Mahipal Lomror (42) and Robin Bist (44) batting with determination but once the top four batsmen were dismissed the visitors innings fell apart. (ALSO READ: Kerala crush Gujarat to enter firs ever semis)

Rajasthan lost last six wickets for 99 runs as they were clueless against Gowtham and Gopal. Salman Khan, batting at number six, added a crucial 25 off 62 balls.

Rajasthan had scored 224 in their first innings with the help of Lomror (50) and Rajesh Bishnoi (79).

Chasing the target, Karnataka were 45 for three in 18 overs at stumps, with Test discard Karun Nair and Ronit More, batting on 18 and five respectively.

Aniket first cleaned up Nischal and then had Siddharth caught by Chetan Bist, giving a rollicking start to Rajasthan as Karnataka were reduced to 14 for 2 in sixth over.

Other Ravikumar Samarth (16) too did not last long as he was trapped leg before by Lomror. 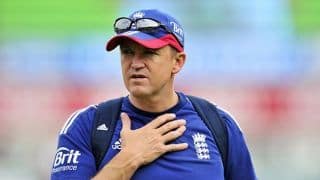 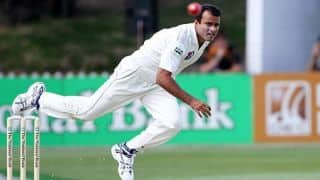