With the six points, MP have now toped Group B with 24 points from seven matches, while Himachal are in second place with 22 points.

Hero of the first innings, left-arm spinner Kumar Kartikeya added another three wickets to take his overall tally to nine scalps in the match that helped Madhya Pradesh thrash Himachal Pradesh by 140 runs on day three of their Ranji Trophy 2018-19 Round 8 Elite B match on Tuesday.

With the six points, MP have now toped Group B with 24 points from seven matches, while Himachal are in second place with 22 points.

Posed with a stiff target of 331 thanks to Rajat Patidar s 54, Himachal wilted under scoreboard pressure. None of the top order failed to register any noteworthy contributions. Lower-order batsman Pankaj Jaiswal top scored with 44 off 41. Kartikeya, who pocketed 6/28 in the first dig, accounted for the wickets of Prashant Chopra (22), Raghav Dhawan (4) and Jaiswal.

Kartikeya returned with figures of 3/58 in his 16.4 overs. Kuldeep Sen bagged two wickets and went for 30 runs in his nine overs.

Earlier, resuming their second dig at 47/2, ahead by 185 runs, Madhya Pradesh folded earlier than they would have liked with offspinner Gurvinder Singh picking up six wickets. He went for 63 runs in his 13.5 overs. Mayank Dagar added two scalps. 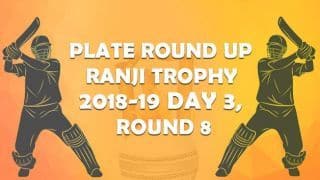