Uttar Pradesh have now consolidated their position at the top with 38 points from eight matches, while Haryana have slipped to seventh spot with 16 points.

Left-arm spinner Saurabh Kumar added another seven wickets to his tally of seven in the first innings to help Uttar Pradesh thrash Haryana by six wickets on the second day of their Ranji Trophy 2018-19 Round 8 Elite C match on Monday.

Uttar Pradesh have now consolidated their position at the top with 38 points from eight matches, while Haryana have slipped to seventh spot with 16 points.

Chasing 106, Uttar Pradesh lost opener Shivam Chaudhary in the first ball of the second innings. No. 3 batsman Umang Sharma followed his team-mate in the second over after he was trapped leg-before by Ajit Chahal for 1. Samarth Singh however, saw UP to the finish line with an unbeaten 53 off 64, that included nine shots to the fence as Uttar Pradesh chased down their target in 21.2 overs.

Earlier, resuming their second dig at 10 for no loss, adrift by 13 runs, Saurabh Kumar once again ran through the Haryana batting order. Only Ankit Kumar, who scored 51 off 65, could offer some sort of resistance to Kumar’s spin on the notorious Lahli pitch with as many as seven batsmen departing with single-digit scores.

Kumar returned with career best figures of seven for 32 in his 16 overs. 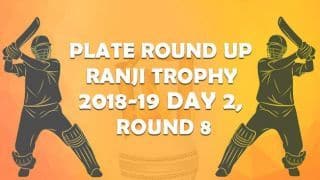 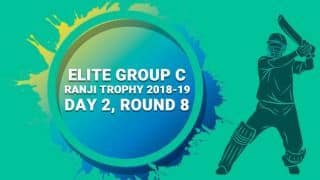