The 40-year-old Wasim Jaffer departed for 98 in just the third time in his first-class career spanning 22 seasons.

The ageless run machine Wasim Jaffer missed out on registering his 57th first-class century by two runs, but that proved insufficient as defending champions Vidarbha are left with only one wicket remaining before they concede a first innings to Saurashtra in their Ranji Trophy 2018-19 Round 9 Elite A game.

At stumps, Vidarbha, who are already through to the quarters, were 280/9, still adrift by 76 runs. On the other hand, Saurashtra need one wicket to claim three points and progress to the knockouts. Saurashtra are on fourth place with 26 points and unless in the unlikely event of a loss, Saurashtra will make it to the QFs. (ALSO READ: UP stake claim for qualification)

Resuming the day at 63/2, with a deficit of 273 runs, Vidarbha lost Ganesh Satish early in the start after he was trapped lbw to left-arm pacer Jaydev Unadkat. Askay Wadkar was the next to depart three overs later after he was dismissed by Chetan Sakariya for 6.

Jaffer found an able partner in Mohit Kale as the duo then steadied the ship with a 146-run partnership for the fifth wicket. Kale, who brought up his second first-class fifty in just his fifth match, added 66 before he was sent back by Unadkat. (ALSO READ: Abhimanyu Easwaran, Manoj Tiwary hold the key to Bengal s target versus Punjab)

Jaffer followed his junior team-mate two overs later after he lobbed a catch straight to Unadkat, who was the pick of the bowlers with six for 56 in his 27 overs. Jaffer s 225-ball stay at the crease saw him tonk eight boundaries and one six. In fact, the 40-year-old batsman departed for 98 in just the third time in his first-class career spanning 22 seasons.

At stumps, Yash Thakur was batting on 3 while Aditya Thakare was yet to open his account. 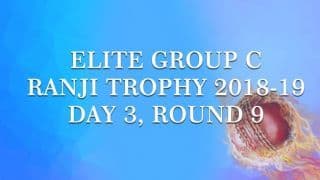