Saurashtra, with 29 points from eight games, join Vidharba, Karnataka and Gujarat in the quarter-finals from Group A.

It was just a matter of time before Saurashtra sealed their passage to the quarter-finals of the Ranji Trophy 2018-19 season. On the final day of their last Round 9 Elite A match against reigning champions Vidarbha, Saurashtra grabbed three points by virtue of gaining a first-innings lead as the match ended in a tame draw on Thursday.

Saurashtra, with 29 points from eight games, join Vidharba, Karnataka and Gujarat in the quarter-finals from Group A.

Resuming the day at 280/9 after conceding a first-innings lead at Rajkot, Vidarbha, adrift by 76 runs, decided to declare their first innings which effectively handed Saurashtra the three points. (ALSO READ: Jharkhand pocket bonus point versus J&K: miss qualification berth by a whisker)

In their second dig, Saurashtra were 218/2 at stumps on the final day with Vishvaraj Jadeja bringing up his maiden first-class century in just his third match. Jadeja s unbeaten 105 that came in 188 deliveries was laced with 13 boundaries and three sixes. The 20-year-old batsman had the experienced Sheldon Jackson, who was unbeaten on 53 off 118 as the duo were involved in a brilliant 108-run partnership for the third wicket.

Saurashtra lost Harvik Desai early in the start for just 8 to Suniket Bingewar. Snell Patel was looking good, but fell six runs short of his fifty after he was trapped lbw by Aditya Sarwate. (ALSO READ: In dead rubber, Mumbai beat Chhattisgarh by nine wickets to record first win)

Left-arm pacer Jaydev Unadkat was awarded the Man of the Match for his six wickets in the first innings. 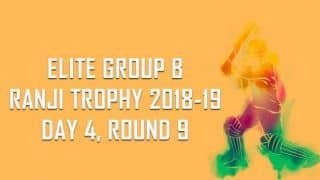