Jammu and Kashmir have finished their campaign at seventh spot with 19 points.

It’s getting tight at the business end of the Ranji Trophy 2018-19 season. Jharkhand who were in contention for a berth in the quarter-finals have lost the race with Uttar Pradesh despite picking up a bonus point in their last Round 9 Elite C match against Jammu and Kashmir.

With seven points, Jharkhand, currently are placed second with 40 points. However, Uttar Pradesh, placed three with 38 points, look set to bag three points against Assam by virtue of gaining a first-innings lead as their last match at Kanpur is heading for a tame draw. So, that leaves us with table-toppers Rajasthan and UP as the two teams to have qualified from Group C. (ALSO READ: Saurashtra need one wicket to seal qualification berth)

Resuming the final day at 24/0 in their second dig, adrift by 144 runs, Jammu and Kashmir were skittled for 120 to hand Jharkhand with an innings and 48-run victory.

Shahbaz Nadeem and Anukul Roy shared seven wickets between them to script J&K’s downfall at the Government Gandhi Memorial Science College ground in Jammu on Thursday.

As many as seven J&K batsmen departed with single-digit scores. Captain Parvez Rasool, who pocketed four wickets in the first innings, added just 1 to the tally before he lobbed a catch straight back at Roy. Even the experienced Irfan Pathan was unable to bail his side out of trouble falling to Nadeem for 20 off 30 deliveries. (ALSO READ: From 35/3 to 35 all out, Madhya Pradesh suffer incredible collapse)

Tail-ender Rasikh Salam top scored with 40 off 25 before he was cleaned up by Roy to seal the match.

Nadeem returned with impressive figures of four for 43 in his 18 overs, while Roy bagged three for 42 in his 11.4 overs. Jammu and Kashmir have finished their campaign at seventh spot with 19 points. 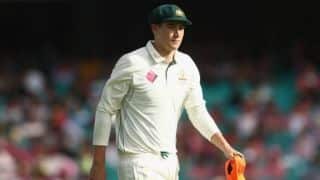