Ravindra Jadeja merited a recall after his sterling performances against South Africa in the recent Test series.

Ravindra Jadeja has earned himself a recall to the India One-Day International (ODI) squad with a string of solid performances against South Africa in the longer format only recently. He played a major role in India thumping South Africa 3-0, playing crucial knocks with the bat while being a constant threat with the ball. His performances in Oceania have not been of utmost impact as yet but he is capable of reversing that. He will look to seize the opportunity with both hands in order to safeguard his position in the Indian setup. ALSO READ: India ODI squad for tour of Australia 2015-16

The slow left-arm bowler is known for maintaining a stump to stump line with subtle variations in pace which keep the batsmen bogged down and help pry out wickets of well set batsmen and does not allow new batsmen to settle into a free-scoring rhythm. He will form an interesting pair with Ravichandran Ashwin if both are selected in the playing XI together. ALSO READ: India T20I squad for Australia

The remainder of the team has a familiar look to it. Mohammed Shami‘s return has boosted India’s pace bowling reserves, he will be key to India’s chances in Australia as he bowled well in the ICC Cricket World Cup 2015. India have the same formidable batting line up which will be faced by a big challenge but have the capacity to overcome it. ALSO READ: Yuvraj Singh included in India’s T20I squad for Australia tour 2015-16 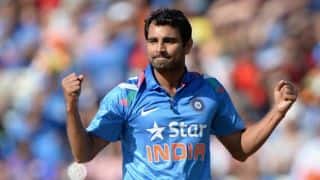