Pandurang Salgaoncar was a fast bowler from Maharashtra state in the 1970s before taking up the role of curator with MCA.

Pune curator, Pandurang Salgaocar caused quite a scene hours before the start of India vs New Zealand, second One-Day International (ODI). Salgaocar, who represented Maharsahtra in the late 70s was caught taking bribe by an undercover reporter. Salgaocar allegedly asked for money in return of tampering with the wicket.

He was further suspended by Board of Control for Cricket in India (BCCI) and is under investigation.

Following is the transcript of the sting operation conducted by TV channel India Today:

Reporter: Sir, how’s this India-New Zealand pitch is made?

Reporter: Is this the same pitch you showed us yesterday (Oct 23).

PS: There’s no doubt about it.

Reporter: Strangers are not allowed near pitches for international matches?

PS: It’s not allowed. Still, we did it because we have the power. The BCCI observer and curator here. The BCCI curator is sitting on my head.

PS: Is that the BCCI’s curator.

Reporter: No outsider can access the pitch, right Sir.

PS: No one can the BCCI’s law.

Reporter: The BCCI’s or the ICC’s?

PS: If someone asks me tomorrow, I’d say no one came. I don’t know.

Reporter: Two ***** players want some bounce on the pitch. If that can be done.

PS: It will be given.

Reporter: We want New Zealand (beep) to be favoured in the October 25 match between India and New Zealand.PS:New Zealand prefer bowling with spinners. Our pitch always suits fast bowler. I told you this is a 340-run wicket, either way.

Reporter: That’s fine. That can be bet on. But we want New Zealand (beep) to be favoured.

PS: That will be done good. I told you.

Reporter: Will they be favoured.

PS: It will be done.

Reporter: Can the condition of the pitch be changed in 30 minutes?

PS: Yes in five minutes. It is a very difficult and a dangerous job.

Reporter: How is it done?

PS: By digging a small hole and pour a bottle of water. The nature of the pitch will change. And like how you did…you can stamp the pitch… dig in your heel and turn. Then the pitch will get damaged.

Reporter: How much should we pay you?

PS: First you see the match. Then you deal with me.

Reporter: When should I pay you?

PS: Let the match get over. 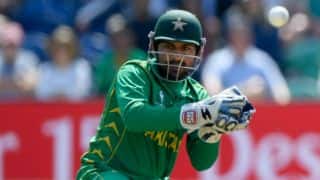