Sydney: Australian spin bowling great Shane Warne has hailed former cricketer and legendary broadcaster Richie Benaud as a ‘legend on all levels’ and as an ‘absolute gentleman’ after the latter passed away on Friday aged 84. Warne penned an emotional letter to Benaud on his Instagram account as tributes flooded in for the late commentator from across the globe. He hailed Benaud as a legend on all levels and thanked the cricket icon for acting as a mentor to him throughout his career.  Richie Benaud passes away: Australian govt. offers state funeral

Dear Richie, I've known you & Daphne for close to 30 years & to everyone you were a legend on all levels & rightly so too. As a cricketer, commentator & as a person, you were the best there's ever been & to top it off, an absolute gentleman… For me it was an honour & a privilege to call you a close friend & mentor, we had so many wonderful times together, talking cricket & in particular, our love & passion of leg spin bowling. I will cherish our entertaining dinners & all the fun times we shared over a long period of time. I would also like to thank you & Daphne for all your support & time you made for me as a young cricketer & leg spin bowler trying to make his way as an 18 year old, your tips & advice along the journey meant so much !!! Richie, you were loved by everyone, not just the cricket family, you were the godfather of cricket & you will be missed by all… R.I.P my friend #hero #BowledRichie

The former Australian captain and commentary doyen passed away overnight in his sleep after battling skin cancer. He was aged 84, The Australian reported. In a heartfelt letter to his late fellow legspinner, Warne stated, ‘Dear Richie, I’ve known you and Daphne for close to 30 years and to everyone you were a legend on all levels and rightly so too’. He wrote this alongside a close-up portrait of Benaud.  Virat Kohli pays rich tribute to Richie Benaud

Warne stated that as a cricketer, commentator and as a person, Benaud was the best there’s ever been anbd to top it off, an absolute gentleman. He claimed that it was an honour and a privilege to call Benaud a close friend and mentor. Warne recalled that they had so many wonderful times together, talking cricket and in particular, their love and passion of leg spin bowling. He stated that he would cherish their entertaining dinners and all the fun times that they shared over a long period of time.  Richie Benaud passes away: Greg Chappell remembers “hero”

Benaud, widely known as the greatest attacking spin bowler of his Test cricket era, eventually paved the way for Warne’s prowess with the ball. Warne further wrote that he would also like to thank Benaud and Daphne for all their support and time they made for him as a young cricketer and leg spin bowler trying to make his way as an 18 year old, adding that the late commentator’s tips and advice along the journey meant so much.  Richie Benaud passes away: Sachin Tendulkar pays tribute

Warne also stated that Benaud was loved by everyone, not just the cricket family, adding that he was the godfather of cricket and would be missed by all. He ended his emotional letter with ‘R.I.P my friend #BowledRichie’ on Instagram.  Richie Benaud dies at the age of 84: Twitter reactions 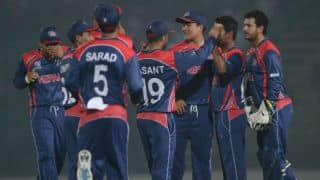