Gambhir feels - irrespective of Dhoni's decision to retire or prolong his career - it is necessary to think about the future.

Former India opener Gautam Gambhir reckons that this is the right time to nurture young wicketkeeper-batsmen like Rishabh Pant, Ishan Kishan and Sanju Samson, keeping an eye on the future.

Since India were knocked out of the ICC Cricket World Cup 2019, rumours of MS Dhoni’s imminent retirement has picked up steam, even though there is no clarity from the BCCI or the man himself regarding this. But, Gambhir feels – irrespective of Dhoni’s decision to retire or prolong his career – it is necessary to think about the future.

Speaking to TV9, the former India opener said, “Now is the time for India to give opportunities to young player. Rishabh Pant, Sanju Samson, Ishaan Kishan or anyone else should get the chance. All of these players have the potential to play the role of better wicketkeeper for India and should be given a chance.” ALSO READ: Selectors should inform Dhoni if he’s dropped or not: Virender Sehwag

Gambhir has been a vocal supporter of Samson, who has dazzled in the Indian Premier League but has failed to carry forward that form in to domestic cricket. Pant, who is now the front runner to take the wicketkeeping spot, in Dhoni’s absence, has had a it tough so far in the ODI set up for India, while Kishan, Pant’s Under-19 captain, has been a regular in India A sides, and is waiting in the wings.  ALSO READ: MS Dhoni, ODI No 4, injuries and rotation the dilemmas for BCCI selectors

“It is now necessary to think about the future,” said Gambhir adding, “When Dhoni was the captain, he also decided to invest in the future. I remember Dhoni said in Australia that I, Sachin and Sehwag can not play together in the CB series because the grounds are big. They thought the youth needed for the next World Cup. Now it is definitely that you take some practical decisions rather than emotional”.  ALSO READ: MS Dhoni’s parents don’t want to see him in a blue jersey anymore: Keshav Banerjee

While it is being reported that Dhoni is unlikely to tour West Indies, Pant will be the first-choice wicketkeeper, but the question arises, who will be the backup keeper. Will the selectors recall Wriddhiman Saha, sidelined with injuries for a year now, but fit again or take a punt on either Kishan or Samson. 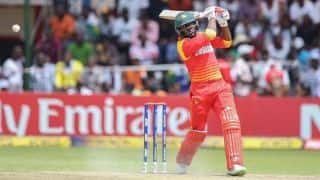