India's ODI, T20I and Test squads for the West Indies tour will be picked on July 19.

It has become common for Indian cricket teams to tour the West Indies after major tournaments. In 2009, India went from the ICC World T20 to the West Indies to play ODIs and T20Is; after winning the 2011 World Cup, the players went into the IPL straight afterwards and then just after that tournament ended, a second-string team went to the Caribbean; immediately after the 2013 and 2017 Champions Trophies, MS Dhoni led depleted sides there as well.

And now, just weeks after exiting the semi-finals of the 2019 Cricket World Cup in England, the Indian team heads back to the West Indies for a full tour. India’s series starts with two T20Is in Florida on August 3 and 4 and then moves to the Caribbean for the final T20I on August 6, followed by ODIs on August 8, 11 and 14. Then the teams play two Test matches, from August 22 at North Sound and August 30 in Jamaica.

Ahead of the BCCI selection meet in Mumbai on Sunday, here’s a look at the major talking points.

Will he, or won’t he? The matter is a hot topic owing to speculation as to whether Dhoni has played his last match for India. The latest report surrounding the former India captain is that he will not tour the West Indies, and going forward will reportedly not play as the first-choice wicketkeeper.

If true, that leaves Rishabh Pant as the primary wicketkeeper for the full tour of the West Indies. While he has been India’s first pick as Test wicketkeeper since the tour of England in 2018, Pant has kept wickets in two of his nine ODIs and in three of 15 T20Is.

The spinoff of Dhoni not being on the tour is that this leaves Pant to face his first full tour as designated wicketkeeper. It is a lot to expect of him, even though he’s young, and this could prompt the BCCI selectors to hand Ishan Kishan, currently keeping wickets for India A in the West Indies, a maiden call-up as understudy to Pant for the ODIs and T20Is.

Virat Kohli has taken breaks since he became captain across all three formats. He sat out the limited-overs leg of India’s home series against Sri Lanka in December 2017 to get married, skipped the Test match versus Afghanistan and the Asia Cup last year and then part of the New Zealand tour in February.

While it would be expected that the BCCI give Kohli a break after the Australia series, the IPL and the World Cup in a row, this time around it could be that he leads India for the full tour of the West Indies.

The ones likely to be rested

Jasprit Bumrah and Mohammed Shami are likely to earn a breather after the World Cup, which puts Khaleel Ahmed and Navdeep Saini as the prime candidates to replace them in India’s limited-overs squad. Kuldeep Yadav and Yuzvendra Chahal have been playing consistently for India and it is probable that at least one of the pair gets some time off.

Hardik Pandya‘s back concerns have reportedly flared up and he is due some rest, at least from the limited-overs leg of India’s tour.

Shikhar Dhawan and Vijay Shankar are currently in rehabilitation mode at the National Cricket Academy, from where there are no accurate reports of their updates. Teenaged batting sensation Prithvi Shaw is also not fully fit, which rules him out of the reckoning.

With Pant far from the finished product – or, many will argue, not even the man for the job – the selectors have to identify someone to bat at No 4 keeping the next four years in mind. India groomed Ambati Rayudu for the job, then discarded him after a couple of low scores. Shankar was identified as the man to bat at No 4 for the World Cup, but after struggling and then getting injured, the role was handed to Pant who earned a call-up when Dhawan was ruled out.

If reports about Dhoni being in a transitional phase are true, and that he will mentor Pant to take over the wicketkeeping duties in ODIs and T20Is, then Pant will not be saddled with the pressure of batting at No 4. If Dhawan were 100% fit, it would have been foreseeable that India bat KL Rahul back at No 4 as he did during the World Cup before he was promoted as opener. But with Dhawan at the NCA, India could either continue opening with Rahul and Rohit Sharma or hand the uncapped Mayank Agarwal a chance at the top and push Rahul back to No 4.

The India A candidates

If the national selectors look to the India A squad playing in the West Indies currently, two names spring to mind immediately: Manish Pandey and Shreyas Iyer. Both are viable options to bat at No 4 but can do the job lower down. If Dinesh Karthik is dropped, one spot should easily to to Pandey or Iyer. Pandey, captaining the side, scored a brisk 100 in the third one-day match this week. Iyer has scores of 42 and 77.

The third batsman who should be discussed by the selectors is young Shubman Gill, who got a chance in ODIs during the New Zealand tour in February but looked out of depth. Gill, who will turn 20 in September, could be picked as a reserve opener.

If Hardik Pandya and one of Kuldeep and Chahal are rested, then from the India A squad, the leading candidates are Washington Sundar and Krunal Pandya, both of whom are handy batsmen too. Pandya took 5/25 in the third one-dayer this week, while Sundar has three wickets in two matches at an exceptional economy rate of 3.20.

Krunal is the frontrunner among the two, and could be the man the BCCI selectors turn to if they seek a replacement for Kedar Jadhav or a backup to Ravindra Jadeja, should he be the one to take Jadhav’s place in the XI.

The only man unlikely to get the nod from India’s previous Test squad from the Australia tour is Murali Vijay. The veteran of 61 Test matches was dropped from India’s XI after he made 49 runs four innings in Australia last December, with a best of 20.

Shaw’s absence should earn Rahul another shot at opening in Tests, putting him back with good friend and Karnataka team-mate Agarwal. But the selectors need to pick a third opener, which puts the spotlight on Gill, who boasts a first-class batting average of 77.78, and who is also part of the India A squad set to play three four-day matches (from July 24 to August 9) against West Indies A.

Wriddhiman Saha, back to full fitness, could earn a recall if the selectors intend on getting Pant to keep wickets across formats. Saha is part of India A’s squad in the West Indies and it is foreseeable that a successful tour puts him in line for a Test recall.

* The meeting has been postponed to Sunday after CoA decided to change rule of BCCI Secretary convening the selection committee meeting of the Indian team. 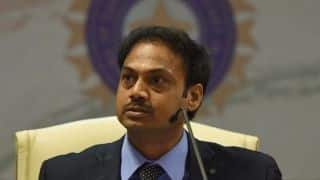 Chairman of selectors to convene selection meetings, not BCCI secretary