India coach Ravi Shastri has praised stand-in captain Rohit Sharma for the way he marshalled his troops during the Asia Cup 2018 in the UAE. It was a straight fourth series win for India under Rohit’s captaincy as they beat Bangladesh on Friday in a last-ball thriller in Dubai to win a record seventh Asia Cup title.

Bangladesh were off to a brilliant start thanks to their openers who added 116 runs in the first 20 overs. However, India, led by their spinners, made a comeback to allow just 106 in the next 30 overs with Bangladesh being bowled out for 222.

“Rohit has been a calming influence and it showed on his captaincy,” Shastri said after the match. “To keep his intensity going even after the start they [Bangladesh] had, showed he was cool in every aspect of captaincy, the bowling changes he made were really good, to concede just around 100 runs in the last 30 overs, I thought it was brilliant.”

Shastri feels the biggest gain from the tournament was India’s fielding which kept improving with every game. Even on Friday, it a special effort from Ravindra Jadeja resulted in the run out of Mohammad Mithun that conributed to Bangladesh losing momentum. Rohit Sharma termed that moment as the game-changer during his post-match press conference.

“The biggest plus was the fielding, game after game, we saved around 30-35 runs in these oppressive conditions. We took wickets consistently and during the middle-overs, the bowlers were outstanding, we bowled well with the new ball in tough conditions and then the spinners came to the party,” Shastri said.

Coming after a 1-4 Test series defeat to England, the performance would have surely pleased coach Shastri but he said the scoreline [in England] doesn’t reflect how well his team performed there. “It’s a different format, but I think everyone knows how well we played in England, the scorecard really doesn’t show it. This is a different format and we needed to start afresh. I liked the intensity with which we played, we were a bit flat against Hong Kong in the first match, but pulled up themselves up later,” he said. 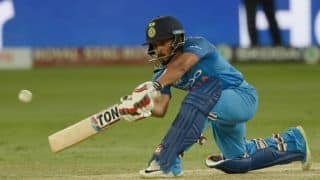