Rohit Sharma scored a measured 137 runs to lead India to 302 in the first innings.

India beat Bangladesh in the ICC Cricket World Cup 2015 quarterfinal match by 109 runs to progress to the semifinal stage where they’ll face the winner of the match between Australia and Pakistan. The story could have been quite different had Rohit Sharma not scored a measured 137 runs to lead India to 302. Read: India vs Bangladesh ICC World Cup 2015 Highlights

But Rohit refused to distinguish that century as overtly special from his other hundreds. “I do not place my innings and knocks in any order. I feel all hundreds you get are really special. Centuries don’t happen every day and whenever you get one, you cherish it,” he told BCCI.tv. Match Report: India vs Bangladesh ICC Cricket World Cup 2015, quarter-final 2

He did however acknowledge that a World Cup hundred resulting in victory has a charm of its own saying, “A maiden World Cup hundred is always special. (It) is more satisfying is the situation in which I got that hundred and most importantly that we won the game in the end,” he said. READ: MS Dhoni wins 100th match as captain

With the century being his second at the iconic Melbourne Cricket Ground (MCG), Rohit said, “I enjoy batting here. It is a good wicket to bat on. Today after the rain break the wicket became a lot better to bat on and the ball came nicely on to the bat.” ICC Cricket World Cup 2015: Complete Coverage

He emphasized on the importance retain wickets until late in the innings so as to accelerate in the final 10. “I knew that no matter how much you end up getting after 30 or 40 overs, you can always bank on the last ten overs,” he said.

Speaking about how he structures his innings, he said, “I like to take time initially and assess the conditions. I try to gauge the wicket behaviour, the shots I can play on that wicket and the ones I can cut down. I plan and pace my innings accordingly.”

Rohit,who added a healthy partnership with Suresh Raina to pull India out from a spot of bother, was all praise for his teammate. “Raina’s fifty changed the momentum of the game. He scored at run-a-ball and changed the course of the game playing those shots. It completely put Bangladesh in a different position. They had an upper-hand initially but then Raina just came in and turned it in our favour.”

Speaking about the preparation for the semifinal, Rohit said, “First we need to see who we are playing and then plan accordingly. It will be a huge game and now there is no looking back. We can’t afford any mistakes.” 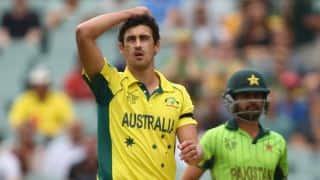 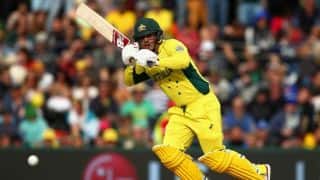