Though India had walloped Sri Lanka on his T20 Internationals captaincy debut, Rohit Sharma had a quiet match with bat. He decided to make up for that in the second match, at Indore. There was no respite for anyone as Rohit went bonkers, not sparing a single bowler en route the joint-fastest hundred in T20I history, in 35 balls. Rohit drew level with David Miller, who had done the same against Bangladesh earlier this year. Rohit also became the fifth batsman in T20I history to register 2 hundreds. Though Suresh Raina and KL Rahul have scored T20I hundreds, no Indian has got 2. Rahul himself took over after Rohit fell for 118

35 balls needed by Rohit to score his hundred, the joint-fewest in history. Miller had also brought up a 35-ball hundred, against Bangladesh at Potchefstroom earlier this year. Before 2017 the world record was 45 balls, held by Richard Levi.

2 cricketers have scored 2 hundreds in all three formats before Rohit Gayle and McCullum. Gayle remains the only batsman with a Test 300, an ODI 200, and a T20I 100.

165 highest partnership for India for any wicket, between Rohit and Rahul today. They went past Rohit and Shikhar Dhawan s 158, against New Zealand at Delhi last month, also for the 1st wicket.

89 highest second-highest score in a team innings, by Rahul today, after Rohit got 118. Rahul went past Smith, who had scored 88 when Bosman got 94 against England at Centurion in 2009.

1 Sri Lankan had conceded more runs than Nuwan Pradeep s 61 today: Sanath Jayasuriya had figures of 4-0-64-0 against Pakistan at Johannesburg in the 2007 World T20. Pradeep also broke Stuart Broad s record (4-0-60-0) in the same tournament for the most runs conceded against India. 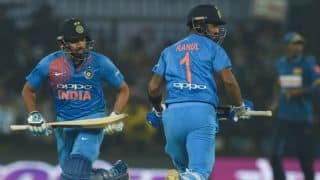 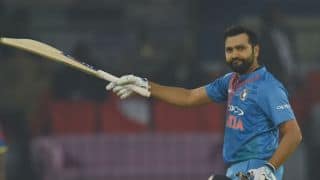