Bangalore takes on dominant Chennai on Saturday, in IPL 2014.

A sagging Royal Challengers Bangalore (RCB) will take on an out-of-sorts Chennai Super Kings (CSK) in match 53 of the Indian Premier League (IPL) at Bangalore. Chennai have gone off the boil recently after being in top form in the earlier part of IPL 7. They won eight games out of 13, but have lost their last three matches on the trot. On the other hand, Bangalore have been way below par with only five wins in 13 matches to become the second team to be eliminated from the final-four contest.

Chennai were virtually unstoppable before their slide began, with Dwayne Smith occupying the No two spot in the batting charts. However, a few mediocre performances have seen him slide to the fourth spot in the list. Opening bowler Mohit Sharma, who was in great form early on, has also tapered off slightly. CSK are a side that desperately needs momentum right now. On the other hand, RCB with the exception of Yuvraj Singh and AB de Villiers have been the underachievers of IPL 7. They are a side that proves that having big names alone is not enough to win matches, and that good temperament and determination go a long way in winning games.

The solid CSK batting order has not been as successful recently, and will be looking to post a big score. Conversely, RCB have struggled with the form of Chris Gayle and Virat Kohli throughout the tournament. While Virat has got back to some form recently, Gayle continues to misfire. The last time these sides met, Ravichandran Ashwin made life very difficult for the RCB batsmen with a spell that read 3-1-3-1. However, AB de Villiers and Yuvraj Singh along with Chris Gayle won the match for RCB in the end. CSK will look to consolidate their position at No two, and RCB will be looking to give their home crowd something to cheer about after a disappointing season. 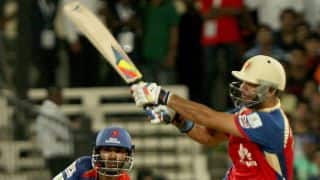