Aaron and Starc failed to score quick runs in the last few overs.

Varun Aaron and Mitchell Starc tried to slog, but failed for Royal Challengers Bangalore (RCB) in their match against Kings XI Punjab (KXIP) in the 2014 edition of the Indian Premier League (IPL) 7. L Balaji bowled the 18th over of the innings. The two tailenders kept trying to go for the big hits but failed to make proper connection. At the end of the over, Starc was on seven off 13 and Aaron on five off 11. RCB struggled to 110 for seven after 18 overs.

Akshar Patel, bowling his second over, kept flighting the ball to the tailenders. Off his third delivery, he strayed too far down the leg stump and went to the fine leg boundary off Mitchell Starc’s pad. In spite of that, his over cost only five runs.

L Balaji bowled the sixteenth over of the innings. He again bowled a tight over, going for just two runs off it. Aaron and Starc were both unable to rotate the strike, looking to go hard at the ball rather than try to find singles.

Rishi Dhawan struck in his first over by dismissing de Villiers. He bowled one on a back of a length and de Villiers cut the ball to Maxwell at backward-point. He departed for 17 off 15 deliveries. The field placements from Baily were good. Albie Morkel cut a wide delivery from Dhawan, but the deep point fielder cut out the boundary. Maxwell came back in the attack to bowl the 13th over. Morkel bent down on one knee and launched one high over deep mid-wicket for a six. Yuvraj then swept a full delivery over square-leg for a four. 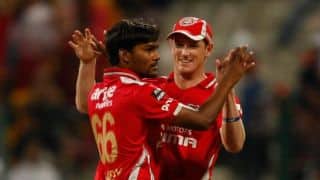