While Manish Pandey scored his second successive fifty, SRH squandered an opportunity to put up a big total on the board.

While Manish Pandey notched up his second successive fifty and David Warner missed out on his sixth consecutive half-century in the Indian Premier League (IPL) 2019, Sunrisers Hyderabad (SRH) lost the plot in the middle overs as Rajasthan Royals (RR) restricted the visitors to 160/8 at the Sawai Mansingh Stadium in Jaipur on Saturday.

After put in to bat, SRH lost skipper Kane Williamson early but managed to zoom past fifty, courtesy Warner and Pandey.

SRH started the proceedings with a five-run first ball, courtesy a Liam Livingstone overthrow off Varun Aaron s bowling. Livingstone faltered again in the second over and conceded two extra runs after having a needless go at the stumps.

If this was not enough, Aaron let one go through his legs in the same over as Oshane Thomas went on to concede seven runs off his first two balls. (IPL 2019, RR vs SRH: FOLLOW LATEST UPDATES)

Fortunately for RR, amidst all the below-par showings in the field, Shreyas Gopal gave them their first breakthrough as he dismissed the SRH skipper for 13 in the fourth over. The right-hander failed to read the googly and was out bowled.

The Pandey-Warner duo put up a 75-run partnership before Oshane Thomas dismissed left-hander for 37 to give SRH their second wicket. While Pandey continued in same vein for a while, Shreyas Gopal struck for the second time as he sent his state teammate at Karnataka packing for 61.

Pandey’s fall derailed SRH innings as RR struck back in some style to reduce the visitors to 137/7 from 121/3 as the SRH middle-order of Vijay Shankar, Wriddhiman Saha, Deepak Hooda and Shakib Al Hasan came cropper.

While Shreyas Gopal had scalped the wickets of Williamson and Pandey, Thomas, Jaydev Unadkat and Varun Aaron too scalped two wickets each as RR did not let SRH put up a big total on the board. 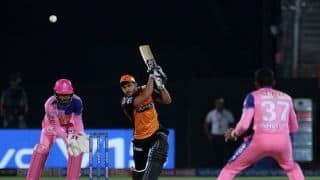 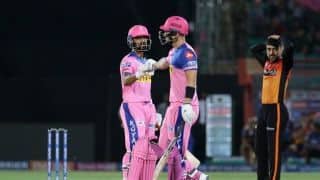