Hanscomb captained Victoria to the JLT One-Day cup title in October, in the process scoring 361 runs in seven innings at an average of 51.57.

Peter Handscomb has found a backer in former Australia fast bowler Ryan Harris, who believes the Victoria captain can succeed if recalled to the Test squad to face India next month.

Handscomb, 27, has not been given a chance to add to his 13 Test caps since the ill-fated tour of South Africa in April where he was 12th man for the Newlands Test match where the ball-tampering scandal broke. He played in the fourth Test, scoring a golden duck in Australia s first innings and 24 in the second as South Africa won by 492 runs.

Handscomb captained Victoria to the JLT One-Day cup title in October, in the process scoring 361 runs in seven innings at an average of 51.57, with four half-centuries. He was named Player of the Match in the final against Queensland for scoring 49 off 45 balls and taking four catches behind the stumps while marshalling his players superbly in a 110-run win.

Since the Sheffield Shield got underway, Handscomb has made 27, 48, 123 and 2. After scoring that hundred against South Australia in a draw, the 27-year-old spoke of switching back to a batting approach that helped him score two centuries and a couple of fifties in his first four Tests for Australia.

“It s a bit of a mindset thing, going back to believing my technique is good enough,” Handscomb had said. I had this technique for three or four years before playing for Australia, then I made runs with this technique as soon as I played for Australia. Then I tinkered with it, and more form started to drop.

“I ve gone back to doing what I do really well, backing in my strengths. I m feeling really good. I feel comfortable and good with my game.”

Australia s selectors are due to name the squad for four Tests versus India starting December 6. 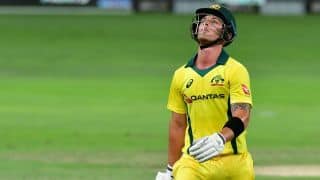 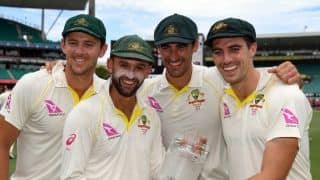