Sachin Tendulkar has asked 7 queries in the ongoing winter session of Parliament.

Sachin Tendulkar, considered one of the world’s best batsmen to ever play the game of cricket, has shown similar dedication to his part as a nominated member of the Rajya Sabha. Tendulkar, who has mostly been absent from the Parliament is known to show care and responsible towards his duties as MP. In the ongoing winter session of Parliament which ends today, Tendulkar has asked as many as seven questions to the house in a fortnight. This is also the first time his queries have been selected to be asked to the house since he being nominated as a member of Parliament in 2012 by Congress led UPA government. Tendulkar remained to be absent from the House when his queries were being answered through written replies. ALSO READ: Sachin Tendulkar asks first ever question in Rajya Sabha in 3 years

Tendulkar so far has only attended 13 days out the 235 days since he joined Rajya Sabha, totaling to 12 sessions in political terms. He was recently included in a standing committee on information technology, headed by BJP MP Anurag Thakur, this is also his first appointment in any committee. Tendulkar so far is yet to attend any meeting of the committee and was also not a part of the five-day study tour of the North-East done by the same committee. He has always been questioned for his lack of appearances in the Rajya Sabha by fellow members of the Parliament.

Flip-side of this is that Tendulkar is also among the best-performing nominated lawmakers when it comes to utilizing funds under the Members of Parliament Local Area Development Scheme (MPLADS). Tendulkar has contributed 98 per cent of his MPLADS funds, making allocations for flood relief in Jammu and Kashmir and Tamil Nadu and rebuilding a school and bridge in Chamoli in the aftermath of the Uttarakhand floods. ALSO READ: Sachin Tendulkar asks about new Motor Vehicles Act; Government responds 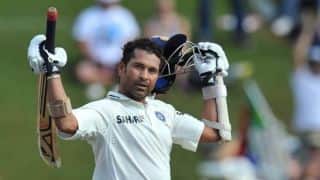