The cricketers accepted the invitation sent by the environment minister to partake in the campaign.

Prime Minister Narendra Modi will kick-start the event by planting saplings at his official residence, whereas India’s Test captain Kohli and grappler Sushil will plant saplings at the Environemnt Ministry.

Minister for Environment, Forests and Climate Change, Prakash Javadekar said that a similar programme will also be held in Mumbai also where India cricketers Rohit Sharma and Ajinkya Rahane will be joined by Tendulkar along with state Education Minister Vinod Tahwade. “This is a good start and we appeal to people that they should also join the campaign by planting more and more trees,” said Javadekar said.

Pathan brothers Irfan and Yusuf will be a part of the ocassion in Vadodara, former Test player Narendra Hirwani, ex-BCCI secretary Sanjay Jagdale and state Environemnt Minister Kailash Vijayvargiya will participate in Indore.

The minister said that no single category of trees or plants will be promoted. “We are not going for mono-culture. People are encouraged to plant native species of plants in their area as different climatic zone have diferent variety of plants,” Javadekar said.

Members of the Indian cricket that is scheduled to leave for Bangladesh on June 7 will take part in sapling plantation drive in Kolkata, a day before. Boxers Mary Kom and Sarita Devi, cue sport legend Geet Sethi and former India Hockey Captain Viren Rasquinha will be travelling on June 5, so they join the league from their places of location. 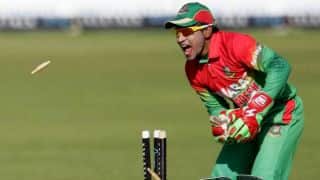