Other players who failed to attain the required points in the different fitness tests include Sohaib Maqsood, spinners Saeed Ajmal and Zulfiqar Babar.

Karachi: Some of the top Pakistan cricketers, including national Twenty20 (T20) captain Sarfraz Ahmed and Umar Akmal, have failed to meet the required fitness standard set by trainer Grant Luden. Other players who failed to attain the required points in the different fitness tests include Sohaib Maqsood, spinners Saeed Ajmal and Zulfiqar Babar along with some others. “The fitness trainer of the Pakistan team, Grant Luden and his team have devised a points system for the fitness tests with 17 set as the benchmark for players to confirm their fitness is of required level,” one PCB official said. “Unfortunately some players could not reach the benchmark,” he added. READ: Shoaib Akhtar wants Mickey Arthur to reshape Pakistan cricket in 8 months

He explained the tests are being held as contracted players are given goals to achieve within three months those who fail to achieve the goals are fined, while those who achieve or surpass them are rewarded financially. Interestingly the four-day fitness tests which began last Sunday at the national cricket academy have been hit by reports in the media that some players were unhappy over the alleged double standards employed by Luden and his team. Some players reportedly have complained to the Board that Luden and his team were soft with some players notably national ODI captain Azhar Ali, pacer Wahab Riaz while taking the tests and put others through harsh tests in adverse weather conditions.

But the official termed the allegations as baseless. He said since the players were taking tests in groups the allegations were baseless. The Board has also employed a sports psychologist and nutritionist Asad Rizvi to hold counseling sessions with the players in the fitness tests and these will also continue in the month long boot camp in Abbotabad that begins this week. Senior players Shahid Afridi and Muhammad Hafeez along with the unfit Haris Sohail, Emmad Wasim have not appeared in the tests since they are carrying niggling injuries.

But Pakistan Test captain Misbah-ul-Haq also joined the tests on Tuesday after returning from performing Umra and interestingly he and senior batsman, Younis Khan are said to be the two fittest players in the program despite their age. Younis is said to have topped with 18 points at the age of 38 while Misbah turns 42 this month. 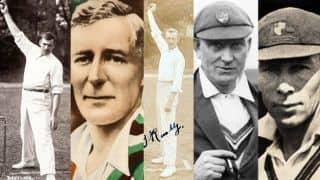