Virender Sehwag looked solid for Kings XI Punjab (KXIP) in their match against Royal Challengers Bangalore (RCB) in the 2014 edition of the Indian Premier League (IPL) 7. Yuzvendra Chahal beat Sehwag’s outside edge with a well-flighted delivery outside off, but a couple of balls later Miller hit one through covers to bring the required runs down to 55 off the last nine overs.

Mitchell Starc came back for another over after taking two good cathces, but started badly conceding two wides off his first two deliveries. A fumble by Yuvraj enabled Miller to take a couple as Starc’s figures started to swell. Starc kept bowling quick, often reaching speeds in excess of 145 kmph. At the end of the tenth over, KXIP needed 62 runs to win with eight wickets in hand.

Earlier, Virender Sehwag was batting on 28 and David Miller on three as Punjab were chasing a paltry 125-run target. Cheteshwar Pujara was the first batsman dismissed for 10. Wriddhiman Saha was out for two runs and Glenn Maxwell was out for six. Both Saha and Maxwell were caught brilliantly by Mitchell Starc at fine-leg.

Varun Aaron bowled a full and wide delivery and Sehwag creamed it through the point region for his first four. Ashok Dinda was brought into the attack in the fifth over. Pujara edged the first delivery to Parthiv Patel behind the wickets. It was a back of a length delivery which moved away. Pujara was out for 10 off 18 deliveries. Sehwag then hopped a turned another back of a length delivery through deep square-leg for a four. The next delivery from Dinda was well outside off-stump, but Sehwag flicked it in-between mid-wicket and mid-on for a four. 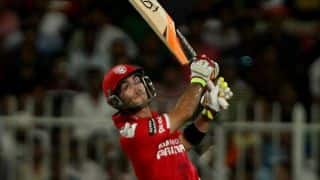