Dhawan exuded confidence that Team India would come back strongly in the Wellington Test.

India‘s opening batsman Shikhar Dhawan said the current Test squad will only get better with time as they gain in experience, and that the New Zealand tour has been another learning curve for them.

The visitors will take on the Kiwis in the second and final Test starting on Friday after losing the opener in Auckland by 40 runs with four days.

“We have been doing well as a team, but unfortunately we end up on the losing side. It is a new team, young players who have got only five-six matches under their belt. It takes a bit of time to settle down. The last Test we played, we fought back really nicely and even in the last innings, we batted really well. There are a lot of positives to take from the defeat and it helped in building our confidence,” Dhawan told reporters at the pre-match press conference.

The loss at Auckland had much to do with the batting failure in the first innings, wherein the team was bowled out for 202 runs after conceding 503 runs to New Zealand.

Dhawan exuded confidence that Team India would come back strongly in the Wellington Test to salvage some lost pride on a thoroughly disappointing tour.

“It is very sad to lose a match, and especially so close, we lost by just 40 runs. But we took positives from that game. Yes, we were disappointed for a bit, but then we overcame those things. There is always a new day. So, we started working hard again and focussed on the positive things. We are confident of playing good cricket in this Test,” asserted Dhawan.

The batsman claimed that he had not seen the Basin Reserve wicket and was told it is a green-top.

“I will play according to how the pitch is. In the previous match, we bowled them out for 100-odd. We have got very good fast bowlers who can repeat that same thing to get them out again on a low score. It is possible. The most important thing is to keep our basics strong in both batting and bowling. We have been a good fielding side and we just need to keep the intensity up. That is it,” he said.

One of the reasons that India were able to get close to the 407-run target was Dhawan’s second Test century.

It followed some pretty ordinary show with the bat from the opener, wherein during his poor run, he was also dropped from the ODI team ahead of a must-win encounter at Hamilton.

“Getting that rest was vital for me, because I was away from match-pressure and could think about my game, and what mistakes I was making. Afterwards I was very calm during the knock and just thought to play as straight as possible.

“The wickets here can be double-paced, especially with the short balls and all this stuff. I planned to play straight and just enjoy being at the wicket and enjoy my time over there,” he said.

Dhawan said it was important for him to get a big score and the century boosted his confidence.

“When I started playing for India, I scored centuries in England too [during the Champions Trophy]. It is not that I did not score runs overseas. But this is only my second [Test] series outside India. I have not played much Test cricket as it is. It has been a learning process for me. And I learn from my mistakes and analyse what I can do to become a better player.

“It was very important for me to get a big score and it boosted my confidence. I have been working hard and got rewarded with a century, so I am happy with that,” he signed off. 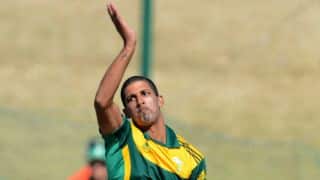