Dhawan moved across and positioned himself for a scoop short standing up, but Hendricks followed the batsman and pulled back the length taking Dhawan by surprise

India opener Shikhar Dhawan, who is playing for India A in Trivandrum, was hit on the back of his neck during the 5th unofficial ODI against South Africa A, off the bowling of Beuran Hendricks, when the opener attempted to scoop a back of length delivery.

Dhawan moved across and positioned himself for a scoop shot standing up, but Hendricks followed the batsman and pulled back the length, taking Dhawan by surprise. The ball rose higher than Dhawan would have assessed and took his eyes off the ball when he could not make the contact with the bat. The ball hit Dhawan on the back of the neck.

In visible pain, Dhawan removed his helmet and was seen rubbing the back of his neck. Play was halted for a while with the physio applying what appeared to a cold water bag. Dhawan then resumed his innings  shortly afterwards.

ALSO READ: Dhawan added to India A squad for last two one-dayers against South Africa A, Shankar ruled out of series

India A, who have already sealed the series, opted to bat first in a delayed start to the final match of the series. They lost Prashant Chopra in the first over to Hendricks. Dhawan, drafted in for the final two unofficial ODIs had made 52 in India A’s losing effort a day earlier at the same venue. 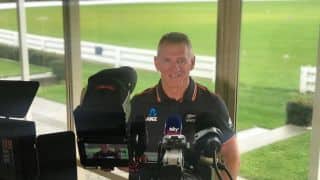