New Delhi: ‘Captain Forever’ Sourav Ganguly is helping a young Bengal team devise a strategy to tackle ‘Captain Cool’ Mahendra Singh Dhoni‘s Jharkhand in the semi-final of the Vijay Hazare Trophy on Friday. Despite featuring the biggest draw of the tournament in a semifinal clash, the match will not be televised live as Model Sports Complex in Palam does not have broadcast facilities. After a commendable victory against Maharashtra in a high-scoring thriller, the CAB president is all set to wear the mentor’s hat, something that the team always looks forward to as he will be meeting skipper Manoj Tiwary and coach Sairaj Bahutule to discuss ways to counter the Dhoni threat. Majumdar, Chatterjee mastermind Bengal s highest run-chase in 4th quarter-final against Maharashtra

“Sourav has already discussed a few plans on how to tackle the Dhoni threat with Manoj and Sairaj. No doubt Dhoni is a formidable player but it’s not impossible to get him out. Dada will be meeting the team in the evening today and will also be present at the ground tomorrow,” a Bengal team source told PTI on the condition of anonymity. This is a young Bengal team and save Manoj Tiwary, Ashoke Dinda and Pragyan Ojha, who have all had IPL experience, others like rookie Kanishk Seth, Sayan Ghosh and Amir Gani have not played against Dhoni. Dhoni-led Jharkhand crush Vidarbha by 6 wickets in 3rd quarter-final

The former India captain has played all the matches since the league stage, having scored a century against Chattisgarh besides other significant contributions. When skipper Tiwary was posed the question, he said: “This is a young Bengal team and they have learnt how to play according to the situation. MS Dhoni is a legend but, on the field, one can’t get intimidated by names.

“We have to stick to our plans and don’t forget they also have good players like Saurabh Tiwary, Ishan Kishan, Virat Singh. You cannot just concentrate on one player and have no plans for others,” Tiwary said. While the Palam wicket will not be a belter like Kotla, toss may be an important factor in the morning in an open ground where there would be some seam and swing movement. Both teams are expected to play the same XI unless there is some injury issues developing at the last moment. 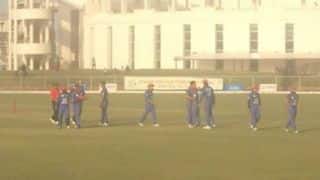