South Africa are hopeful that Dale Steyn will be back for the rest of Kingsmead Test series against England after the shoulder scan proved to be inconclusive with no tear to the muscles or ligaments. Steyn was facing discomfort while bowling on the first day of the match and left the field mid way after 3.2 overs. With the fear of being penalised, he continued to stay in the field and bowled the rest of the balls, but his unbearable pain made him to step out the field in 21st over. At that point he was taken for a scan immediately and he returned to the field. FULL SCORECARD: South Africa vs England, 1st Test at Durban

He will now play the warm-up matches to test his fitness on the fourth day, before a firm decision is taken whether he will continue to play the further games. South Africa’s team manager Mohammad Moosajee was affirmed that Steyn should be fine and it is just stiffness in his shoulder. As reported on espncricinfo, Moosajee said, “Dale first experienced discomfort in his right shoulder after day one, which was probably because of a long layoff and great deal of bowling load on the first day. He woke up sore on the second day but got through first innings but then in second innings, the pain increasingly troublesome so he had to leave the field.”

He further added, “The scan is inconclusive in that it showed no tears to muscles or ligaments so we are treating it as shoulder stiffness. If he gets through warm-ups, he will be allowed to bowl tomorrow and then we will take a call on his availability for the Cape Town Test after this match.” Steyn sustained a groin in South Africa’s four Tests series against India and sat out for the rest of the matches. After a long gap of seven weeks, lead to the strain on his shoulders once again. ALSO READ: Dale Steyn: It’s even-stevens on Day 1 of 1st Test against England

If Steyn is ruled out due to his injury, South Africa has to be dependent on their pace men, Morne Morkel or Kyle Abbott, the specialist spinner Dane Piedt and the part-timers. If Steyn remains in the current Test, Kasigo Rabada, who is in the squad, will be the replacement. 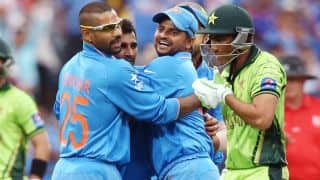