South Africa announced themselves as a force to reckon when they registered a massive 257-run victory against West Indies during the ICC Cricket World Cup 2015 match at the Sydney Cricket Ground on Friday. West Indies were dismissed for a score of 151 in 33.1 overs while chasing a target of 409. West Indies captain Jason Holder top-scored for his side, scoring 56 off 48 balls, while Imran Tahir took five wickets while conceding 45 runs in 10 overs.  South Africa earned two points as a result to sit on the second spot in Pool B.

South Africa earlier finished on a massive total of 408 for the loss of five wickets after 50 overs. AB de Villiers was the highlight of the South African innings, blasting his way to a score of 162 from 66 balls. He brought up his century in a mere 51 balls, the second-fastest in World Cup history. He also went on to record the fastest 150, which he brought up in 64 balls. The South African innings was supported by fifties from Hashim Amla (65), Faf du Plessis (62) and Rilee Rossouw (61). West Indies skipper Jason Holder conceded 104 runs from 10 overs, the second-most expensive in World Cup history. ICC Cricket World Cup 2015: SCHEDULE & MATCH DETAILS

The West Indians, in reply, were off to a disastrous start when Chris Gayle, their biggest hope in the chase, departed after scoring a mere three runs off four balls, missing the line of a Kyle Abbott delivery to get his middle-stump knocked. Any hopes of Dwayne Smith and Marlon Samuels rescuing their side from trouble died with the latter getting caught off the bowling of Abbott for a nine-ball duck, with West Indies reeling at a score of 16 for two in the fourth over.

Dwayne Smith added 36 runs for the third wicket with Jonathan Carter, hitting four boundaries and a six during his stay at the crease. He was the only batsman in the top-order to put up a fight whatsoever.The partnership came to an end when Jonathan Carter was caught by AB de Villiers near mid-on to depart for a score of 10.

Smith’s innings came to an abrupt end when he smashed a Tahir delivery towards long-on, only for David Miller to take a spectacular running catch at the boundary, giving the Pakistan-born Tahir a wicket off his first ball of the match. Tahir took his second wicket in the same over, trapping Lendl Simmons leg-before. Replays later showed him getting an inside edge onto his pads, although the batsman did not go for the review. A scoreline of 53 for five began to push South Africa towards breaking the record of biggest margin of victory in a One-Day International (ODI), which is currently held by New Zealand (290 runs against Ireland). Top 10 batsmen in ICC Cricket World Cup 2015

Darren Sammy was stumped by Quinton de Kock off the bowling of Imran Tahir to depart for a score of five off 11 balls. Tahir completed his maiden ODI five-wicket haul, with Abbott taking a fine catch at short third man to dismiss Andre Russell for a three-ball duck. At a 63 for seven, it was all but over for West Indies. Top 10 bowlers in ICC Cricket World Cup 2015

Holder decided not to give up, and decided to redeem himself with the bat after having a horror spell during the South Africa innings. The West Indian skipper hit three boundaries and four massive sixes to bring up his maiden ODI fifty, and guide West Indies to 151, a respectable score compared to the position that they were in at one stage. Holder added 45 runs for the eighth wicket with Ramdin, before stitching a 42-run stand with Jerome Taylor. The match came to an end with Suleiman Benn edging a Morkel delivery to the slips, where Amla took a simple catch. South Africa 257-run victory is currently the joint-highest margin of victory in World Cups, equalling India‘s win against Bermuda in the 2007 World Cup. AB de Villiers’ 66-ball 162 not out: Statistical highlights of the fastest ODI 150 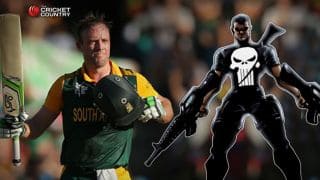