Pakistan were 76 for four at lunch after winning the toss and batting on a well-grassed pitch on a hot day.

Pakistan were 76 for four at lunch after winning the toss and batting on a well-grassed pitch on a hot day.

Azhar Ali, one of only three Pakistanis with previous Test experience in South Africa, was unbeaten on 31 at the interval.

Rabada struck first, trapping Imam-ul-Haq leg before wicket for nought with a full delivery in the second over. The batsman wasted a review of a decision from umpire Bruce Oxenford which never looked in doubt.

Rabada lifted his new ball partner onto his shoulders as other players rushed in to congratulate him.

Shan Masood, playing in place of Haris Sohail, who suffered a knee injury during the pre-match warm-up, looked competent in scoring 19 before being bowled off his thigh pad by Olivier, who followed up by getting Asad Shafiq leg before for seven.

Shafiq reviewed Oxenford’s decision but replays showed the ball would have hit the bails in the ‘umpire’s call’ zone. 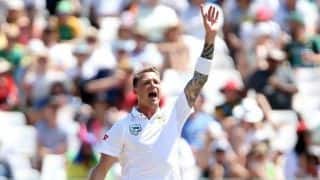 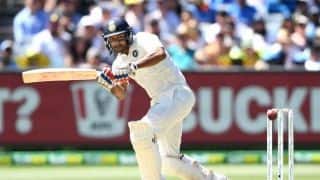 It wasn’t easy to get hold of my emotions: Mayank Agarwal