Fast bowler Duanne Olivier has taken the place of the injured Lungi Ngidi for the three-match series.

South Africa on Thursday named uncapped batsman Zubayr Hamza in a 13-man squad for a three-Test series against Pakistan, starting in Centurion on December 26.

There is also a recall for fast bowler Duanne Olivier in the absence of rising star Lungi Ngidi because of a long-term knee injury.

Ngidi had been expected to become a regular member of the fast bowling attack following the retirement of Morne Morkel at the end of last season.

Hamza, 23, had a breakthrough season with the Cape Cobras franchise last season, scoring 828 first-class runs at an average of 69.00. He also had a successful tour of India with South Africa A earlier this year. But he may have to wait to make his debut.

“His selection is part of our vision for the future,” said selection convener Linda Zondi. “It is inevitable that some of our senior players will start thinking of retiring in years to come.”

It will be Pakistan’s first Test tour of South Africa since 2012-13 when Graeme Smith led the hosts to a 3-0 clean sweep against Misbah-ul-Haq’s tourists. 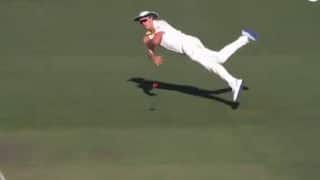