Sarfraz was overheard on the stump mic calling Andile Phelukwayo 'kaale' in Urdu.

Sarfraz Ahmed, the Pakistan captain, is at the centre of a racial slur controversy that could gain steam over the next couple days. During the second ODI between Pakistan and South Africa in Durban on Tuesday, Sarfraz was overheard on the broadcast stump microphone sledging Andile Phelukwayo in what sounded like a racist comment.

After Phelukwayo chopped a delivery from fast bowler Shaheen Afridi past the stumps to fine leg for a single, and as he crossed to the other end of the pitch, the stump mic picked up Safraz saying, in Urdu: “Abbe kaale, teri ammi aaj kahaan baithi hain? Kya parwa ke aaye hai aaj?”

In English, this translates to: “Hey black guy, where is your mother sitting today? What [prayer] have you got her to say for you today?”

As soon as Sarfraz said this, the on-air commentator Mike Haysman asked former Pakistan captain Ramiz Raja what was said.

Raza replied by saying that it was “difficult to really translate that” because it was “a big long sentence”.

The ICC could yet view Sarfraz’s chatter as racist, though there has been no response from the match officials. As per Article 2.13 of the ICC’s anti-racism code which relates to abuse and obscene or offensive language, it says that “This offence is not intended to cover any use of language that is likely to offend another person on the basis of their race, religion, gender, colour, descent, national or ethnic origin. Such conduct is prohibited under the ICC’s Anti-Racism Code and must be dealt with according to the procedures set out therein”.

As it turned out, Phelukwayo’s role in South Africa’s five-wicket win was massive. He claimed 4/22 to help out Pakistan for 203 and then scored 69 not out off 80 balls in a partnership of 127 with Rassie van der Dussen to be named Man of the Match. 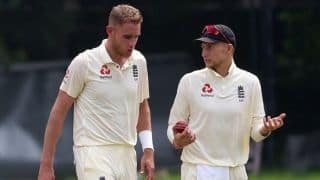