Lakmal said a key for Sri Lanka's bowlers was that they bowled consistently in the right areas.

Port Elizabeth: Sri Lanka‘s cricketers have been told to enjoy themselves as they seek to make history after a dramatic second day of the second Test against South Africa at St George’s Park on Friday.

Needing 197 runs to become the first Asian team to win a Test series in South Africa, Sri Lanka were 60 for two at the close, needing 137 more runs to complete a 2-0 series triumph. “Everybody knows what is expected of them,” said bowling coach Rumesh Ratnayake.

“The leadership has said, ‘just go out and enjoy yourselves’. Everybody is aware of history being made but that should be at the back of the mind. Everybody has the freedom to bat how they want to do at the right time.”

Eighteen wickets fell and 282 runs were scored during an extraordinary day’s play, leaving both teams with a chance of victory. (2nd Test, South Africa vs Sri Lanka, Day 2: REPORT)

South Africa seemed set to take control when Sri Lanka collapsed in a flurry of strokes to be bowled out for 154 before lunch, giving the hosts a first innings lead of 68 runs.

But Sri Lanka’s bowlers hit back, bowling out the hosts for a paltry 128 – by 40 runs their lowest total in a home Test against the islanders.

Suranga Lakmal, Sri Lanka’s most experienced bowler, took four for 39, while part-time off-spinner Dhananjaya de Silva took a Test-best three for 36. With only ten wickets in 24 previous Tests, De Silva had match figures of five for 51.

He was forced into a front-line role when left-arm spinner Lasith Embuldeniya suffered a badly dislocated left thumb, an injury which required surgery and prevented him from batting or taking the field on Friday.

Lakmal said a key for Sri Lanka’s bowlers was that they bowled consistently in the right areas. “The accuracy and intensity has been good,” he said.

“We are quite confident that we are going to win. But it’s not going to be easy. The bowling of South Africa is of a world-class level,” said Lakmal.

South African batting coach Dale Benkenstein insisted the Test was still on a knife-edge. “It hasn’t been our best series,” he said. “We didn’t know a lot about a lot of their players. We may have been a little bit complacent.

“But the game is still on the line. A good start (for South Africa) tomorrow morning and it could very hard to get those runs.”

Sri Lankan captain Dimuth Karunaratne and Lahiru Thirimanne put on 32 for the first wicket at the start of their chase but both were dismissed in the space of six balls.

Oshada Fernando and Kusal Mendis saw out the day, with Fernando striking two boundaries in the last over, bowled by left-arm spinner Keshav Maharaj.

Thirimanne and night watchman Kasun Rajitha were dismissed in the first four overs of the morning after Sri Lanka resumed on 60 for three. They were followed by a succession of batsmen who played extravagant shots before perishing.

Kusal Perera, the star of Sri Lanka’s surprise one-wicket win in the first Test in Durban, thrashed two fours and an audacious six over extra cover in one over from Rabada before being caught behind in the fast bowler s next over. He made 20 off 15 balls.

De Silva struck four fours in making 19 off 24 balls and Niroshan Dickwella hit six fours and a six before he was last man out for 42 off 36 deliveries. Kagiso Rabada took four for 38. 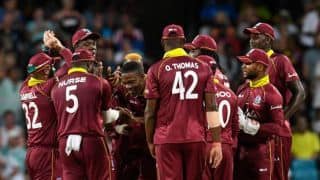