All-rounder Andile Phehlukwayo was missing because of a hand injury. Fast bowler Anrich Nortje was selected to make his international debut.

South Africa won the toss and decided to bowl in the first one-day international against Sri Lanka at the Wanderers Stadium on Sunday.

Captain Faf du Plessis said there could be some early life in the pitch because of a 10am start in a day game. He expected the pitch likely to “flatten out” later. (SA vs SL, 1st ODI: FOLLOW LIVE UPDATES)

The South African team included only four of the players beaten in a Test series last month.

“There is a freshness and energy about this group,” said Du Plessis. (ALSO READ: Amla out, Ngidi back for first three Sri Lanka ODIs)

All-rounder Andile Phehlukwayo was missing because of a hand injury. Fast bowler Anrich Nortje was selected to make his international debut.

“We are playing two spinners. It (the pitch) is a bit dry so it may help in the second half.”

Batsman Oshada Fernando, who made his Test debut in the recent series against South Africa, was set to play in his first one-day international. Six of the team played in the Test matches. 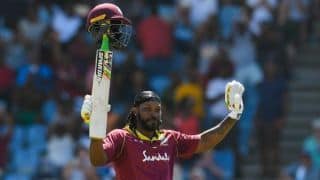