De Kock, who scored 121, made batting look easy as he hit 16 fours and two sixes before being dismissed in the 31st over.

Durban: Quinton de Kock ended a streak of near misses with a scintillating century for South Africa in the third one-day international against Sri Lanka at Kingsmead on Sunday.

The left-handed De Kock had made scores between 80 and 94 in his five previous matches for South Africa, including two Test matches, and his reaction on reaching his 14th one-day international century, off 89 balls, revealed more relief than ecstasy.

As in the first two one-day internationals, De Kock made batting look easy as he hit 16 fours and two sixes before being dismissed in the 31st over. He and in-form captain Faf du Plessis put on 97 off 66 balls for the second wicket with Du Plessis making 36 off 27 balls.

Kusal Perera, the match-winning hero of Sri Lanka’s win in the first Test at the same ground, left the field in the seventh over after injuring his left leg making a diving stop in the field. He was sent for scans and it was not clear whether he would be able to bat. 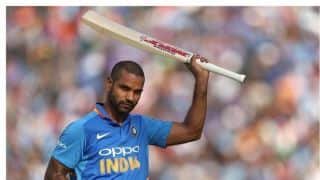