Reeza Hendricks and Wiaan Mulder were left out of the South African squad for the fourth and fifth ODI of the Sri Lanka series.

Reeza Hendricks and Wiaan Mulder were left out of the 15-man squad for the fourth and fifth ODI against the Lankan side. The two did not enjoy a good run of form when given a chance and hence, were dropped from the squad.

The Faf du Plessis-led side has already won the ODI series with two games to spare after beating Sri Lanka by 71 runs via Duckworth/Lewis/Stern method in a rain-hit encounter in Durban on Sunday.

Markram is making a comeback to the side on the back of impressive performances, including the knocks of 85, 139 and 169, for The Titans in the domestic 50-overs competition.

It is great to see how well JP has regained his best form after being out of action for so long.

What has also been highly encouraging is see how well the Proteas have played when they have returned to franchise cricket. It is important that they should dominate at this level and that their skills should rub off on our emerging talent, added Zondi.

JP, Aiden and Dwaine Pretorius have all made significant contributions to their franchises in recent matches. (ALSO READ: Aiden Markram by no means out of South Africa s plans: Faf du Plessis)

We will use the final two matches in the ODI series to continue to examine all the options that are available to us as far as the World Cup squad is concerned, concluded Mr. Zondi. 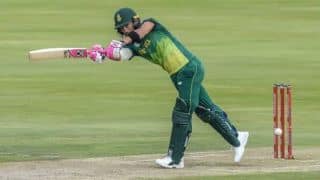