Sri Lanka take on Afghanistan in the Super 10 Group 1, Match 16 of the ongoing ICC World T20 2016 at Eden Gardens Stadium in Kolkata.

Sri Lanka take on Afghanistan in the Super 10 Group 1, Match 16 of the ongoing ICC World T20 2016 at Eden Gardens Stadium in Kolkata on Thursday. Sri Lanka’s form has not been great off late and they would look to bounce back to winning ways. Afghanistan, on the other hand, are in a good form, having qualified from their group after beating Scotland, Zimbabwe and Hong Kong. Afghanistan will look to continue their dream run but it will be a challenging task for them against a Test playing nation. FULL CRICKET SCORECARD: Sri Lanka vs Afghanistan, T20 World Cup 2016, Super 10 Group 1, Match 16 at Kolkata

Sri Lanka have a lot of work to be done, especially improvement in batting. Their sheer inability to bat throughout the innings and poor selection of shots at crucial moments have led their batting down, in turn leading to a poor performance in the game overall. However, their bowling has been better as they have managed to restrict opponents and a slight improvisation in this department as well would lead to them being the invincible. The Lasith Malinga factor could be the key. They played two warm-up games against New Zealand and Pakistan, losing both the ties. ICC World T20 2016: Do Afghanistan possess a threat?

Afghanistan have benefited from the presence of Inzamam-ul-Haq and Manoj Prabhakar in their coaching staff. They have played to a plan and have really impressed. On their day, they can definitely upset a major side and it might be their day against Sri Lanka. Considering their performance in the final qualifying match against Zimbabwe, their batting was quite brilliant with Mohammad Shahzad, Samiullah Shenwari and Mohammad Nabi scoring 40, 43 and 52, respectively. While in their bowling, it was the rookie Rashid Khan, who claimed three wickets for 11, thus almost cementing his place in the side. Sri Lanka in ICC World T20 2016: Wounded nation seek redemption

Going by Sri Lanka’s recent performance, they will want their senior players to step up. Dinesh Chandimal, Angelo Mathew, Tillakaratne Dilshan, Rangana Herath and Lasith Malinga will be the key. They enter the tournament as defending champions and they have a lot to prove. This is the first time in many years that they will play a major tournament without Kumar Sangakkara and Mahela Jayawardene. As for Afghanistan, considering their performance in the previous tie against Zimbabwe, they are likely to stick with the same winning squad. However, players in batting like Noor Ali Zadran, Gulbadin Naib and in bowling like Samiullah Shenwari could well be replaced.

With the match being held at Eden Gardens in Kolkata, the track is definitely going to be slightly on the slower side. However, T20 being an unpredictable format, both the teams stand a good chance. It is not expected to be a full house but Afghanistan can well pull off an upset. 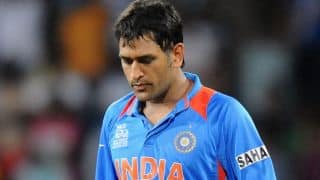