Sri Lanka replaced pacer Lasith Malinga, who retired from ODIs after the first game of the series, with Isuru Udana and left out Thisara Perera to bring all-rounder Akila Dananjaya for the second ODI.

Bangladesh captain Tamim Iqbal won the toss and elected to bat in the second one-day international against Sri Lanka at R. Premadasa Stadium in Colombo.

Bangladesh brought in left-arm spinner Taijul Islam for pacer Rubel Hossain in their only change from the opening defeat.

“Looks a nice wicket, we think there’ll be something for the bowlers under lights. We have to start well, whether we bat or bowl first. He’s (Lasith Malinga) a world class bowler. It’ll (Malinga’s absence) give us a lot of confidence, they still have world-class bowlers,” said the Bangladesh skipper at the toss.

“After Malinga, we have to look for wicket-taking options. That’s why, we have given a chance to Isuru, he’s a death-overs bowler. Lahiru and Pradeep bowled well in the previous ODI. Every time, we want one guy to get a big score. That’s what I’m expecting as a captain,” said Dimuth Karunaratne. 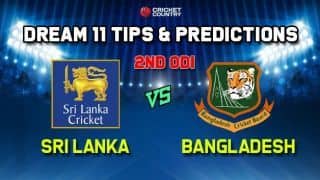