The second ODI will be held at the same venue on Saturday.

The first of the five-match ODI series between England and Sri Lanka turned out to be a damp squib with incessant rain forcing umpires to call off the match at Dambulla on Wednesday.

Put into bat by Sri Lanka s newly-appointed captain Dinesh Chandimal, England openers Jason Roy and Jonny Bairstow notched 49 runs for the opening partnership before Pradeep had Bairstow caught behind for 25 in the eighth over. Off-spinner Akila Dananjaya then sent Roy (24) in the ninth over after he was caught at mid-off.

England were at 92/5 in 15 overs with Joe Root (25) and skipper Eoin Morgan (14) at the crease when the heavens opened. There was no respite from the monsoon rain as wet outfield forced play to be abandoned.

The second ODI will be held at the same venue on Saturday. 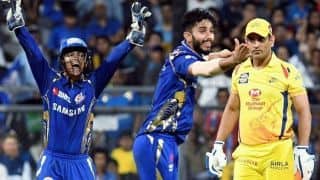