WBBL 2015-16 kicks off today with its first match between Heat Women and Melbourne Stars Women at Melbourne.

Meanwhile, Stefanie Taylor is hopeful that she and her team Sydney Thunder performs well in the tournament, “I hope that things go well, you’re playing against renowned international players, I mean really good players, so I just hope that things go well for me especially, and for my team. I hope that with this first time, there’s going to be a second time and thereafter, hopefully everything goes well, and people come out and watch.” Women’s Big Bash League 2015-16: Stefanie Taylor signs up for Sydney Thunder

Marizanne Kapp, South African all-rounder said she is honoured to play alongside great women cricketers, “Obviously in the women’s game, it’s a big step forward because it’s a tournament where you play against the best in the world and it’s at a higher level, because sometimes I feel like, especially with this new ICC Championship that you get to play all the teams in the world. In this tournament you get to play with the best in the world. So I think it’s a good step for women’s cricket, and to be part of the first Women’s BBL is a real privilege.” READ: Marizanne Kapp named Women’s Cricketer of the Year at CSA Awards

England’s fast-medium and off-break bowler Laura Marsh added it’s refreshing to play in WBBL 2015-16, “It’s pretty strange, first time I’ve come over and played for another team. Obviously playing with the NSW girls with the likes of Ellyse Perry and Alyssa Healy and Alex Blackwell – we’d normally be sitting in meetings planning ways to try to get them out rather than working with them to try to figure out how to play against the opposition. It’s a refreshing, new thing to do.” ICC Women’s World Cup 2013: Australia prevail in low-scoring thriller against England 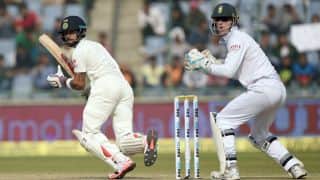