England picked up a couple of wickets in the session but Smith has put Australia on top in second Ashes Test at Lord's.

Australia go into lunch on Day Two of the second Ashes Test in a decent position. They are 424 for the loss of three wickets at the end of 118 overs. Chris Rogers shared a 284-run stand with Steven Smith to put Australia right on top. They have Adam Voges batting along with Smith who has looked in great touch now after the struggle yesterday. England did get a couple more wickets in the session which would have made them feel better but they know they have a lot of work still to do. Live cricket updates: England vs Australia, 2nd Test at Lord s, Day 2

The play on Day Two got off to a strange start as James Anderson hit Rogers on his head as the later tried to duck under a short one but was hit on the side of his head. He hit a couple of good shots after that but soon departed for 173, inside edging a ball from Stuart Broad. Michael Clarke came in but did not quite make an impact and was out for a low score of 7, when he hit Mark Wood straight to Gary Ballance at square leg. Read: Chris Rogers, is it really your time to retire?

Australia were 337 for one at the end of the first day’s play of the second Ashes Test. Rogers and Smith had played through the day after they lost David Warner earlier in the day for a score of 38 when he tried hitting Moeen Ali over covers but was caught by Anderson at wide long off. England had a couple of chances but they did not grab them. Ian Bell dropped Smith when the Australian was just on 50 then. He went onto score his tenth Test ton by the end of play. Read: Ashes 2015: Steven Smith s battle to Lord s honours board

Earlier on Day One, Australia won the toss and elected to bat first. Australia made a couple of changes, bringing in Mitchell Marsh and Peter Nevill for Shane Watson and Brad Haddin. England went into the game unchanged from the previous Test. Read: Rogers, Smith propel AUS to 337/1 at stumps on Day 1 of second Ashes Test 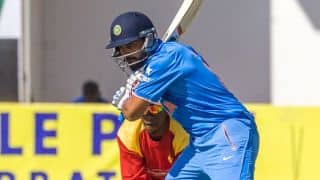