Steven Smith’s 104 and his 121-run sixth wicket stand with Matthew Wade helped Australia pull off an unlikely three-wicket victory in the fourth One-Day International and seal the series with a match to spare. This is Australia’s first victory over the Proteas at Melbourne Cricket ground in seven encounters.

The entire match was based on two partnerships. AB de Villiers and David Miller shared a 122-run stand when South Africa were 77 for three which saw them fight back to post 267. In response with Australia having lost half their side, Wade and Smith put on a key partnership which eventually proved to be a match-winning one. South Africa will have to blame themselves for some sloppy effort towards the end which saw the close match slip out of their grasp.

In a must-win match, the pacers put up a disciplined effort at the start to tighten the screws on Australia’s aggressive top order. Dale Steyn was given a short spell early on but it was Kyle Abbot’s first spell of 4-0-5-1 that gave Proteas the edge.

Abbott struck the first blow removing the explosive David Warner leg-before. The relentless accuracy made run-scoring difficult. In the absence of Imran Tahir, they had included an extra pacer along with Ryan McLaren replacing Rilee Rossouw thereby making it a strong pace attack. Each of them kept a tight leash to take the required rate for the Aussies beyond six within 20 overs of the innings.

After a brief partnership Watson gifted his wicket to Mclaren nicking to the keeper. Finch followed soon trying to pull uppishly on the leg-side giving a catch to Faf in the deep. Similar to the Proteas innings, the Australians were three down early.

The match kept moving away from Australia when George Bailey was caught behind for 16 and a key batsman in a tough run-chase — Glenn Maxwell. Steyn was the bowler to dismiss both batsmen as Australia slumped to 98 for 5. With the pressure of increasing required rate, this was Proteas’ best chance of closing out the match but then Smith was not going to relent.

By the time South Africa got the sixth wicket, the Aussies were 49 away from the target. With an explosive James Faulkner coming in, Australia were always going to be favourites. Smith and Wade shaped the innings brilliantly being cautious at the start and displaying a fluent effort. Smith was eventually dismissed with a run needed to win. His 104 was his second ODI ton.

In hindsight, the missing extra boost towards the end of the South African innings has cost them the match and the series. De Villiers missed out on a well-deserved 19th ODI century. It was a fine innings from the skipper who displayed a relatively risk-free batting to get to his 50 in just 46 balls. Miller too maintained restraint in going for the big shots early on. The duo accelerated between 30 and 35 overs before Miller fell in the second over of the powerplay. The brittleness in South Africa’s batting was exposed once again as the crumbled post de Villiers’ departure. They managed just 71 runs in their last 14 overs. 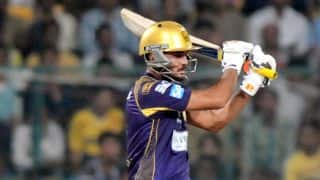