Even after receiving the ICC bowling ranking, England fast bowler Stuart Broad does not consider himself to be the best bowler. In fact, he believes South African pacer Dale Steyn is the best bowler of this generation. Though Steyn did not receive an opportunity to play in the series, Broad considers the award should have been given to Steyn. Englishman, Broad has become the third bowler to achieve the ICC Test bowling rank after Ian Botham in 1980 and Steve Harmison in 2004 following the devastating bowling spell portrayed against South Africa at Johannesburg on Saturday. LIVE CRICKET FULL SCORECARD: South Africa vs England, 4th Test at Centurion

The 29-year-old is delighted with the reward but would be glad to see England as top Test team after their win in the series against South Africa. “It (No.1 ranking) is not something to take for granted and it is a very special thing to have happened,” Broad told reporters, as mentioned on CricBuzz. “When you consider that only Beefy in the 1980s and Harmy in 2004 have been No. 1 as English bowlers, it is a lovely achievement. However, it is not the end-goal and it doesn’t feel like the biggest thing right now because there is so much more going on with the team. I’m not being aloof or disrespectful, but there is such a determination in the side to get this team to No. 1.” ALSO READ: Stuart Broad becomes No. 1 ranked bowler in ICC Rankings for Test cricket

While speaking about his team mate James Anderson’s performance, Broad said, “We’re very fortunate to have played the amount of cricket we have together. We suit each other’s style of bowling. We can be grumpy with each other, we can congratulate each other, but there is never a battle between us to get wickets. It is very much ‘let’s get these 10 wickets and get off the field, how are we going to do that? Shall we swing it, shall we wobble it?’ People talk about cricket being an individual game but I really don’t agree with that, everything is done in a partnership. When Rooty (Joe Root) and Stokesy (Ben Stokes) are batting together, Stokesy will get a bad ball because Rooty has seen off three good ones. Jimmy and I are the same, and generally the guy at the other end who is not getting the wickets is the one who is building the pressure and maybe even bowling better. When I took seven for 40-odd against New Zealand, Jimmy bowled like a dream and I just picked up the wickets.” ALSO READ: South Africa vs England 2015-16: Dale Steyn resumes training ahead of 3rd Test

Though Broad has received accolades for his Test performance, he has never received an opportunity to play for short-format games since ICC World Cup 2015. Liam Plunket has received the a go ahead for limited overs series in South Africa for Steven Finn’s replacement. With ICC World Twenty20 2016 and ICC World Cup in 2019 at home, Broad is willing to show his credentials in these formats as well.

“I’m desperate to play white-ball cricket again for England. You have a short career and I’m not going to play until I’m 37 or 38, so I want to play as much cricket as I possibly can,” he said. “I’m as fresh as I’ve ever been, the knee surgery [in the autumn of 2014] was the best decision I’ve ever made, and I’m loving my cricket. The coach puts all the emphasis on the players, the atmosphere in the changing room is all about entertainment and that suits my style of playing. It is all about changing the momentum of games. There is a lot of important white-ball cricket coming England’s way with the World T20, the Champions Trophy and then the 2019 World Cup, which I want to be involved with. The dream of mine is to play in that World Cup and win it at home. That would be epic.” 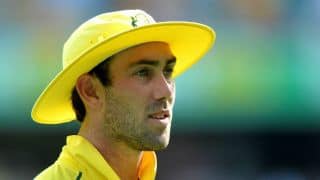